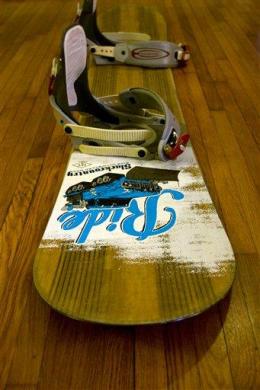 TANNERSVILLE: Each winter the masses spill on to snow-slathered slopes, often wearing a new jacket or toting new skis and a renewed desire to test the mountain. This year there is plenty of high-tech gear to help them do it faster and better.

I tried a few products aimed at augmenting the snow-riding experience: two helmet cameras that record high-definition video, an ultra-light snowboard made with a layer of hemp and gloves designed with shutterbugs in mind.

If you’ve advanced past the bunny slopes and are serious about outdoor sports, you might want to check these out:
• The Contour GPS ($349.95), from Seattle, Wash.-based Contour Inc., is a light video camera designed to be worn on a sports helmet, mounted onto bicycle handlebars or affixed to other surfaces with appropriate add-ons.

It’s is less than 4 inches long with a lens tube not much wider than a half-dollar coin. It records to a Micro SD memory card and can shoot at full high-definition resolution of 1920 x 1080 pixels.

I strapped the camera against my helmet by threading my goggle strap through the mount on the side of the camera. The camera rested flush and snug against the right side of my helmet.

The Contour GPS has a finger-sized slider on top of the camera with two positions — record and off. That made it easy to use with gloves on.

The resulting HD footage was high-quality stuff. I had crisp footage of the slopes, trees and my riding partner as we plummeted down the slopes. It was shaky when I turned my head to look for oncoming traffic, or when my snowboard chattered a bit on an icy patch of snow. But it was better than I’ve been able to do previously while holding a video camera in my hand while riding. The sound quality was better than expected.

The GPS feature was the cherry on top. After launching the Contour Storyteller software (Mac or Windows), I was able to watch my videos and an overhead map view (courtesy of Google) that gave me the speed and elevation at all point during my ride. I was represented by a dot, and a line showed the path I took. The display showed me doing a brisk 20 mph as I slid down the Big Pocono Run at Camelback Mountain Resort.

• The Drift HD 170 ($329), from U.K.-based Drift Innovation, is a camera with some different standout features. It boasts a wireless remote to record and stop recording (which I wore like a watch), and a built-in LCD screen for convenient playback.

I attached the Drift camera to the top of my helmet with the provided stick-on mount of sturdy plastic. I wore the remote on my wrist like a watch.

It was nice to watch the footage over lunch on the camera’s LCD screen; just in case I missed a shot of a particular run that I might want to do over.

Once I viewed the footage on a proper HD display, I found the footage slightly sharper and more vivid than the Contour GPS’s.

An 8-gigabyte SD card was more than enough to shoot an entire day’s worth of fun on the slopes. The battery lasted, too.

• The Slackcountry UL ($649.95), from Ride Snowboards, trades the snowboard’s traditional top layer of plastic for hemp fiber. The engineers at Ride claim the hemp cuts the board’s weight by nearly half a pound and is stronger than the traditional design.

It’s early in the season, so there wasn’t much thick powder to glide over in the Poconos, something the lightweight board is designed to do well. But the Slackcountry UL rocked quickly and accurately from edge to edge down an advanced slope. It felt quick and responsive, more so than my older Burton board.

I did notice that the rougher hemp-laden top surface was too coarse to hold my stick-on scrape plate, which I use to knock snow off the bottom of my boot. That’s the lone strike against the novel top layer.

If hemp truly is more environmentally friendly to produce and bond onto Ride’s snowboards as the company states, the designers are to be applauded for ingenuity. I don’t ride hard enough to break a board’s tail or tip, but the increased strength that hemp gives should please aggressive riders who go after the terrain park.

• Seattle, Wash.-based POW Gloves has two models, the Transfilmer ($65) and the Pho-tog ($50), both designed to protect a photographer’s hands during snow season while freeing up the index finger to work the shutter button.

On the Pho-tog glove, the tips covering the thumb and index finger can be peeled back. The Transfilmer model is a mitten that peels back to reveal the bare tip of the index finger while the other fingers are covered by an interior glove.

I found both models to be a vast improvement over fully removing a glove in cold conditions just to snap off a shot or two.

Each of these products is a smart choice for the slopes this winter. They incorporate a blend of new technology and design to enhance your experience on the snow, and they may just make you the envy of the lift line.

Of hemp, smoke and mirrors