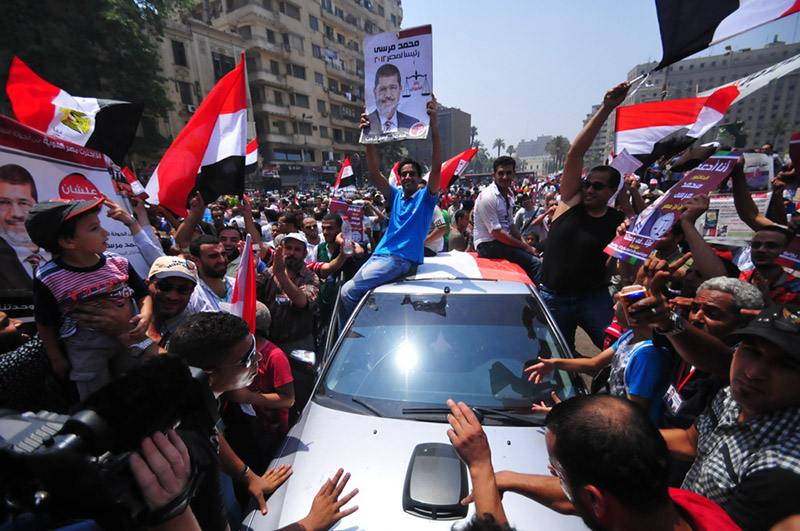 Presidential candidate and Muslim Brotherhood leader Mohamed Morsi declared he was victorious in the second round of the country’s presidential polls early yesterday morning.

Morsi addressed his supporters and journalists at his campaign headquarters after observers from the Freedom and Justice Party, the political arm of the Muslim Brotherhood of which Morsi is chairman, claimed that he had won with over 12 million votes –clinching a victory against Mubarak’s last prime minister Ahmed Shafiq.

Morsi said he had won with 52 percent of the vote and promised Egyptians he would honour the martyrs whose blood had paved the way for Egypt’s first free and fair presidential elections.

“To Egyptians everywhere who strive for a better tomorrow, we are not here to bring up the past or seek revenge. We will strive for a fair and just nation, for a civil, modern, constitutional and a democratic state” Morsi told journalists and supporters at the press conference, held in the early morning hours.

Morsi’s supporters flocked to Tahrir Square to celebrate their claim of victory. Hundreds of protesters caused a traffic jam and several held up Qurans among passionate chants of “Where is the media, the constitution is here” and “Bread, freedom and Islamic sharia.”

Shafiq’s campaign spokesperson, Ahmed Sarhan, accused the Brotherhood of false statements and said that since the final official results from the Presidential Elections Committee (PEC) had not come in yet, Morsi’s victory declaration was meaningless.

“You can’t just get up early and declare yourself president” Sarhan tweeted.

Sarhan went on to say that the claims were a strategy to convince the public of a victory opening up the possibility of making claims of fraud if Shafiq is declared the victor. They can claim the election is fraudulent and have popular support backing their claim.

Mahmoud Baraka, Shafiq’s campaign press coordinator, claimed that Morsi’s numbers were wrong and that Shafiq was in fact ahead by 53 percent, during a phone interview on the independent broadcaster OnTV. The PEC is set to announce the official results next Thursday June 21 after receiving the final numbers from polling stations across Egypt.

According to article 28 of the March 2011 constitutional declaration, PEC’s decisions are irreversible and cannot be appealed; when it declares a winner it will be final.

The Supreme Council of Armed Forces, the ruling military council, had released a “complementary constitutional declaration” on Sunday night after poll stations closed.

In this decree, the council defined and limited presidential powers, especially on defence related issues, giving itself legislative power, the right to form the Constituent Assembly tasked with writing a new constitution, as well as a right to veto any of the Assembly’s suggestions.

SCAF had dissolved the People’s Assembly, the lower house of parliament, last Thursday, 14 June, based on a Supreme Constitutional Court verdict that declared the parliamentary election law to be unconstitutional.

The military council will now act as the legislator until a new PA is elected after the formation of a new constitution. The Muslim Brotherhood, which had 47 percent of seats in the PA, is rejecting both its dissolution and the new constitutional declaration.

“Ahmed Shafiq, [Field Marshal Hussein] Tantawi, the constitutional declaration and the dissolution of the parliament are all illegitimate,” Morsi’s supporters chanted in Tahrir Square.

Riad Mohamed, a Morsi supporter, said that the military needed to get out of politics as soon as possible “If the military does not do its job and its job alone, all these generals and the Field Marshal will be sent home like Turkey’s generals.”

At the time of writing, Sameh Ashour, head of the lawyers syndicate and of SCAF’s Advisory Council told AlJazeera that the next president, whether Morsi or Shafiq, is a temporary one and that a new one would be elected after the ratification of the new constitution and the election of the new PA.