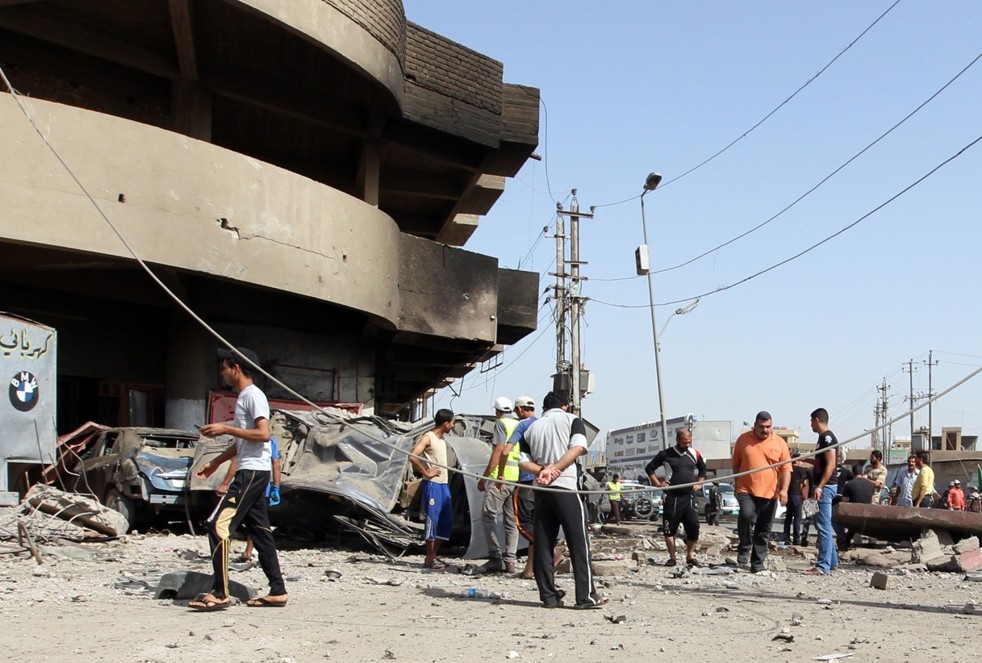 Coordinated attacks punctuate a period of pilgrimage in Iraq, increasing instability in the summer months. In the most recent attack 26 people were killed and 72 injured in an attack in the Kazimiyah neighbourhood of Baghdad on Saturday. The attack followed a series of co-ordinated bombings throughout the month of June, which targeted Shiite Muslim pilgrims.

Saturday’s attack targeted the perimeter of the shrine of Imam Moussa Al-Kadhim, a great-grandson of the Prophet Mohamed, as Shiite pilgrims were worshiping. The explosions involved two separate car bombs, one hidden in a taxi in the predominately Shiite neighbourhood of Al-Shula, leaving 14 dead and 46 injured while a second car exploded near a crowd leaving the shrine leaving 12 dead and 26 injured.

Dina Najem is a 21 year student living in Baghdad. Over the last two years she has been involved in reform movements to improve infrastructure and civil society in Iraq, “After the full withdrawal of US troops from Baghdad the situation became reasonably stable” she said, “However conflict, at times between politicians, has made the situation something to be worried about again” she told Daily News Egypt, referring to the political crises that surround Iraqi Prime Minister Nouri Al-Maliki.

Sunday’s explosions follow attacks last week in which 80 people were killed in 24 co-ordinated bombings. Also directed at Shiite pilgrims, they were among the most deadly attacks since the US troops withdrew from Iraq in December last year. An Iraqi branch of Al-Qaeda, ‘The Islamic State of Iraq’ has claimed responsibility for these explosions, citing Shiite occupation of Iraqi territory as their motivation. In the same statement the group threatens further attacks, hinting to observers that they may be also responsible for Saturday’s deaths.

Special Representative of the Secretary-General (SRSG) for Iraq, Mr. Martin Kobler, stated in a press release: “I am deeply shocked and utterly dismayed by the despicable attacks across Iraq today that have claimed the lives of scores of Iraqis, including many pilgrims, and have injured dozens more.”

Pilgrim groups make vulnerable targets for attacks, given the congregation of large numbers of people. Such pilgrimages were not permitted before 2003, however these pilgrimages have become more important in the new Iraqi context and are now attended by large numbers of Shiite Muslims.

Last week’s attacks take place in the context of what seems to be a worsening security situation in Iraq. At the beginning of June, 26 people were also killed and nearly 200 wounded by a suicide bomber outside the Shiite Endowment in Baghdad. On 11 June, around 40 attacks were also reported throughout the country. Researcher and blogger Joel Wing, writing on ‘Musings on Iraq’, comments that since 2003 attacks by insurgents have tended to rise during summer months, noting that this follows an ‘annual pattern’.

The tensions between the different groups in Iraq echoes current Parliamentary disputes between Shiite, Sunni and Kurd groups regarding previously agreed power-sharing arrangements. Opposition parties are also seeking to gather support for a vote of no confidence against Prime Minister, Nuri Al-Maliki. These groups claim that Al-Maliki has not successfully implemented equitable power-sharing between these groups. In addition, some believe he is controlling decision making in attempts to consolidate power.
The current string of attacks and the Parliamentary disputes both raise questions as to how to improve the security and political stability in Iraq over the coming month.