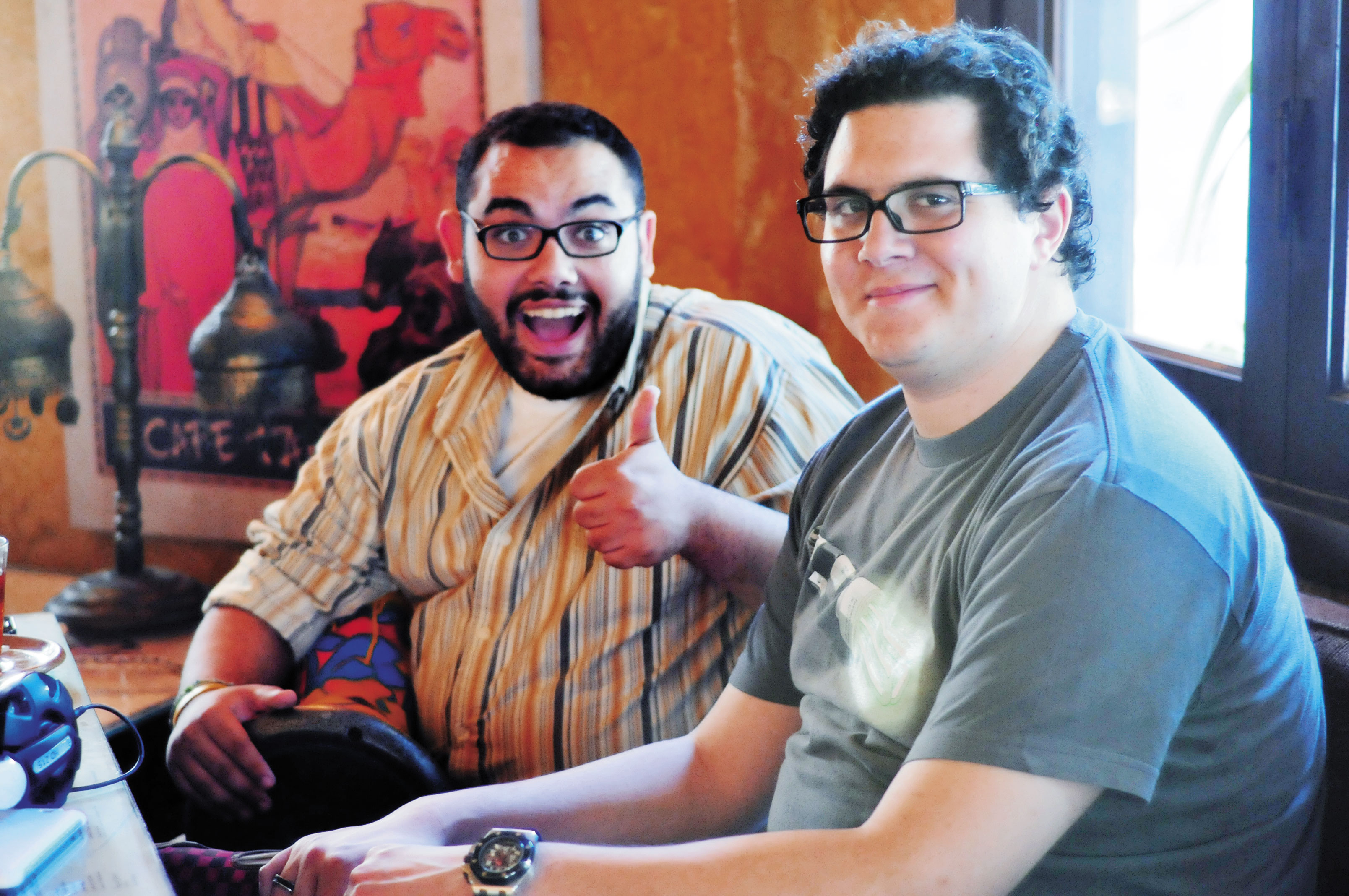 You cock your ears and listen. There’s no question about it, the guitar riffs are definitely from the Eagles’ hit Hotel California. But there must be some mistake. Instead of Don Henley crooning about a ghostly hotel, some guy is singing—very beautifully, actually—in Arabic. About a lady called Aunt Samia teaching a group of donkeys to play guitar, no less.

Welcome to the whimsical world of musical comedy.

Ahmed Safi el-Din and Marwan Imam are High on Body Fat, a musical comedy duo hailing from our very own Cairo, whose distinctive style involves parodying popular songs—such as Lady Gaga’s Bad Romance—and replacing the lyrics with humorous Arabic or English ones.

Having earned their stripes doing bookstore gigs and small shows, the two friends have ramped up their performances as of late, performing in Germany last March and storming into the finalist rounds of season two of Arabs Got Talent, the acclaimed Arab adaptation of the talent show franchise.

Upon meeting them, it is immediately apparent why, among all Cairo’s music enthusiasts, Safi and Marwan made it this far. Though they both have clearly distinct personalities, they possess a degree of synchronization of thought and speech usually only found in twins.

With hilarious, well-crafted songs that expertly incorporate everything from politics to moustaches and aubergines, one would think the dynamic duo spent hours meticulously writing and rewriting every word to ensure the lyrics were perfect. Not so. True to their name, the band simply gets high on body fat and writes.

“We stay up as late as we can, stuff our faces with Twinkies and the songs just write themselves. Most of them get done in three or four hours.” says Safi of their creative process.

“When the synapses stop firing, that’s when the magic happens,” adds Marwan.

When asked about how they were doing in relation to the other participants in “Arabs Got Talent”, the duo seemed worried but optimistic.

“The competition is a lot stronger than last year” says Marwan, “but we’ve got the edge of basically having two acts, music and comedy. That’s one more than anyone else has.”

“They’ve got a girl who can beatbox with a flute!” Safi says in mock outrage, “I didn’t know you could do that.”

With regards to their future, Marwan and Safi seem less than preoccupied with the outcome of the show. Win or lose, they say that they plan to keep making music and expanding their artistic endeavours.

“We want to move away from just parodies. We’ve written a couple of originals. One’s about the menstrual cycle. You probably don’t want to hear that” says Marwan, “but we also did a short movie and we want to experiment with different sounds and techniques.”

With their unique pedigree of musical caricatures and meaningful messages, the band certainly has a good chance of making the finals of Arabs Got Talent. Their next performance will be on 22 June in Lebanon, and will be broadcast live to the rest of the Arab world.

“We’re just sad Shafiq [presidential candidate Ahmed Shafiq] stopped wearing his famous sweater” says Safi with pseudo-regret as we stand up to leave, “that part of the song always got us a few laughs.”

Reality television has never played an integral role in Egyptian mass media. We prefer, or used to at any rate, to follow our soaps and Ramadan series, losing ourselves in the lives of fictional and far more interesting people.

In recent years, however, musical reality television programmes such as Arab Idol and Star Academy have experienced a huge surge in popularity. Fierce rallying behind favourites has always characterized the Egyptian sports scene, and now this phenomenon has spilled over into these shows. Lara Scandar, an Egyptian contestant on Star Academy 6 who ended up in fifth place, was greeted by roaring crowds on her return. Her Facebook page boasts almost 250,000 fans, and more than a few declarations of undying love and devotion.

“I remember being in utter shock. I didn’t really grasp the concept until I had a minute to myself” says Lara, “I just didn’t know how to believe that all these people were there for me, holding the Egyptian flag and screaming my name.”

So what can possibly explain the popularity of these once-alien programmes? Perhaps it is the novelty of seeing people on screen who aren’t politicians or lawyers. Perhaps it is the raw freedom of a normal person with a microphone on live television that we find so liberating. Perhaps it is even a belated acceptance and fostering of the arts in a society where practicality has become valued over creativity.

Regardless of the motives, High on Body Fat has given us a figure to rally behind. Or to be precise two, rather stout, figures. Watch them performing live in Lebanon and be sure to have a plate of Twinkies on hand, just in case inspiration strikes.