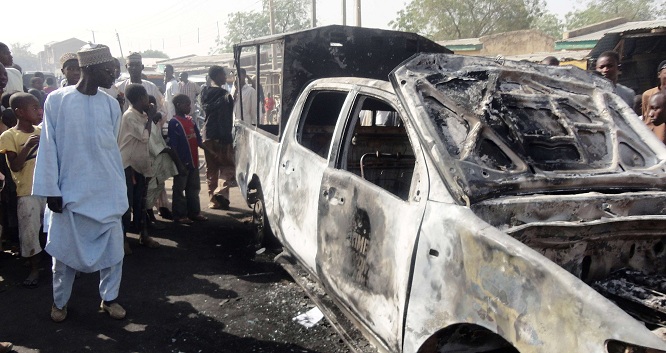 Unrest continues to beset Nigeria following violence that broke out in Kaduna Monday night when relatives of victims of a series of co-ordinated attacks were stopped by security officials from accessing morgues or entering the cities. Nine people were killed in the ensuing violence which carried through until Tuesday.

The riots sparked a series of co-ordinated bombings targeting churches in three cities on Sunday which left at least 50 dead and dozens injured.

Immediately following the bombings, the police and military in Nigeria cordoned the areas surrounding the churches imposing a 24-hour curfew which was renewed on Tuesday in the wake of the ongoing unrest. Similarly, a curfew was imposed in Yobe on Tuesday following reports of shootings and explosions on Monday night which left several dead.

The first two attacks took place in the Wusasa and Sabongari districts of Zaria, previously targeted by the militant group, Boko Haram. The third bombing took place in the city of Kaduna, while the attacks on Nassarawa and Barnawa were simultaneous. Following the bombings, Christian youth took to the streets in protest barricading roads in the towns of Trijania, Gonin Gora and Sabon Tasha and attacking motorists they suspected were Muslim. There were also reports of mosques being burned in retaliation and Nigerian daily, Voice, reported that bodies were seen being thrown on the side of roadways after clashes on roadways.

Demands to impose Islamic Sharia Law have been made by Muslims and Islamic Sharia Law had actually been imposed in several Nigerian states between 1999 and 2000; there are current demands by some Muslims – especially the Boko Haram militant group – to impose it throughout the country. There are fears that the violence in Nigeria will escalate. In 2001,over 1000 people died in riots between Muslims and Christians. More than 700 died in 2004 in violence between Muslims and Christians, in what came to be known as the Yelwa Massacre. And in 2008, almost 380 people died in two days of sectarian violence in the city of Jos. The militant group, Boko Haram – who allegedly has ties to Al-Qaeda in the Islamic Maghreb and wants to impose Islamic Sharia Law in Nigeria – has attacked several churches in Nigeria over the past year. The words Boko Haram roughly translate into “western education is a sin.”