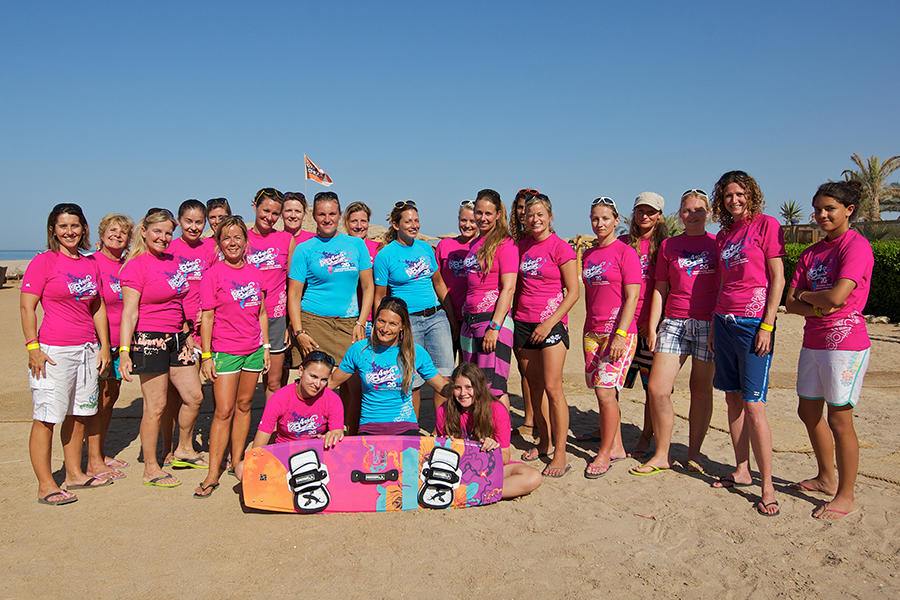 Last weekend El Gouna welcomed back nine-time kiteboarding world champion Kristin Boese for the KB4Girls 2012 event. This kiteboarding camp brought together 22 female participants from three continents for three days of intense training and fun. Being one of only six KB4Girls GLOBAL camps being held this year, the 2012 El Gouna event was the only one in Africa and the Middle East.

The KB4Girls Foundation was established by Boese at the end of 2010, with the aim of empowering females through the sport of kiteboarding. It is a not-for-profit organisation through which Boese and all those involved provide their time and guidance for women interested in kiteboarding free of charge. In return, all participants in KB4girls events are asked to raise funds for a local charity focussed on supporting women in need. Participants in the El Gouna 2012 camp raised money for the women’s shelter run by Hope Village Society in Cairo.

Boese has, not surprisingly, been voted one of the top 10 most influential kiteboarders of all time. Most recently she played a key role in the International Kiteboarding Association’s (IKA) Olympic campaign, which represented kiteboarding to the International Sailing Federation(ISAF) and resulted in the sport being chosen as an Olympic sailboat class for the 2016 Olympic Games in Rio. Now that kiteboarding offers competitors the chance to compete in the Olympic Games for their country, interest in the sport is expected to grow exponentially. With year round perfect kiting conditions in Egypt, there could be future champions in the making—exciting young talents are already emerging locally.

In 2010 Boese held her first KB4Girls event in El Gouna and 22 women from nine countries across three continents took part. The group of girls kiting together, all wearing bright pink lycras was an incredible sight as they drove each other on and really went for it. The jumps were equally spectacular to the crashes but that was all part of the learning and the fun.

Teamwork is a strong feature of these events as everyone pulls together to help each other. Participants learned how to harness and combine different tools such as visualisation, using DVDs and simulator training on land to prepare, before venturing onto to the water to try new tricks and apply newly learned skills. Boese herself demonstrated all the tricks and techniques the girls want to learn before they tried them themselves. Watched by Boese as well as pro coaches Andrina Kelly and Dagmara Dentkiewicz, participants refined their moves and learned many new ones.

As well as boasting warm water lagoons and wind year-round, as a gated community El Gouna offers an incredible place for women, either alone or with families and friends, to meet and socialise and kite together. The camp was about much more than a group of girls simply kiting together, it also ran a social programme that took advantage of El Gouna’s diverse night life and long term friendships were forged.

The event was such a success that Kristin and the participants are already talking about coming back next year.