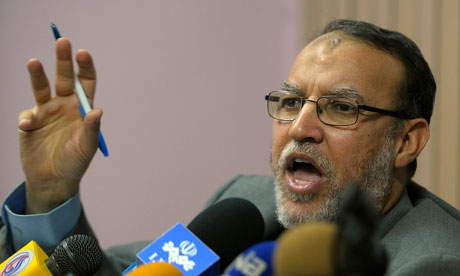 The Muslim Brotherhood Freedom and Justice Party will pursue legal action against Al-Dostour Newspaper, charging the daily with slander, libel and defamation for an article alleging the FJP was planning to assassinate nearly 200 public officials.
The article published on 21 June alleged that the FJP planned to plant members of its party in areas like Tahrir Square and Mostafa Mahmoud Square to deliberately incite youth to violence in order to draw the ire- and perhaps strong arm response of authorities.
It is a tactic, the newspaper claimed, that would sow instability and street-level action should the FJP candidate, Mohamed Morsi, not be declared president.
The article claimed to have become privy to “the minute details of an emergency meeting between the leaders of the Freedom and Justice Party.” It also stated the Brotherhood’s party had made plans to “order Bedouin groups to attack checkpoints in Sinai to facilitate the entry of Hamas members and Iranian revolutionary guards to help them stage a coup against the armed forces and the president.” The article also suggested that among the plans was a plot to assassinate more than 200 public figures simultaneously in order to sow fear and panic.
Deputy Head of the FJP Essam El-Erian said the report was “all lies,” and it was intended to tarnish the image of the party and its candidate. He added that the newspaper had “adopted the same policies used by the former regime and its security apparatus.”
In a statement on the Brotherhood website El-Erian also pleaded with media covering Egyptian politics to adhere to professional ethics and objectivity, and called on journalists to thoroughly investigate claims about the FJP in order to avoid inaccuracy.
The allegations are a stark contrast to the image the FJP has worked hard to present, one that promises inclusion and gradual progress. On Saturday, Mohamed Morsi held a press conference where he announced “With the revolutionary spirit and vitality persisting positively, peacefully, in Tahrir Square, we continue our discourse, seeking public good and national stability.”
The accusations come against a backdrop of intense speculations about the intentions of the Muslim Brotherhood’s political wing. Unverified reports of meetings between SCAF and Muslim Brotherhood representatives plague the organisation daily, largely driven by suspicions that the group is trying to cut a deal that would be mutually beneficial for the military and the MB.
The accusations serve to exacerbate the current confusion plaguing the elections. Al-Dostour is the only publication so far that has reported this potential “massacre of the century in Egypt”, but the credibility of their charge is hampered by the absence of any named sources.