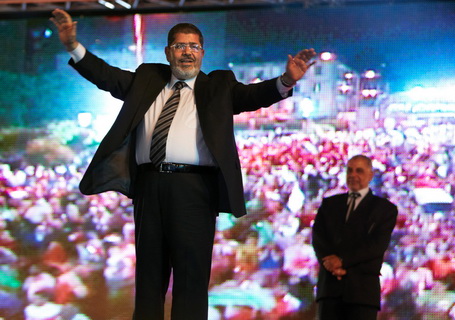 After two rounds of elections, appeals filed by both sides and delays in delivering a final announcement, the Presidential Electoral Commission addressed the nation from the State Information Service Press Hall.

It declared that after nearly one week of reviewing the election results they have found Mohamed Morsi, candidate from the Muslim Brotherhood’s Freedom and Justice Party to have unequivocally defeated Ahmed Shafiq, former Prime Minister under Hosni Mubarak, making him the President of Egypt with 51 percent of the vote.

His campaign team began the victory celebration with a moment of silence for those killed in the 2011 revolution before breaking into choruses of the national anthem ‘Belady’ (my country).

Crowds gathered across Egypt, awaiting the final result of an intense week of anxious guessing, premature claims of victory, and accusations of election fraud. In Tahrir Square, supporters of Morsi, have been gathering in the tens of thousands since last Thursday celebrating the victory they claimed since almost the first poll centres closed. Despite securing the win, Morsi and his party must contend with the loss of control over Egypt’s governance suffered by the president’s office in the last three months.

Also a High Court declaration dissolved the parliament they dominated and another court still threatens to dissolve their party based on a Nasser-era law. While still setting off fireworks in Tahrir Square supporters of Morsi said that their work was not done, they planned to stay “until SCAF is gone”.

In Nasr City, supporters of Shafiq gathered since last night at the Memorial of the Unknown Soldier greeted the news with disappointment voiced in anger, tears and calls for a recount. Their fears of a Muslim Brotherhood-led Egypt realised in the PEC announcement.

President Morsi inherits a nation divided. Approximately 48% of those who voted for Ahmed Shafiq were driven by a fear of at best a marriage of religion and state, and at worst an Islamisation of the identity of the nation. Ahmed Shafiq whose supporters rested on the presumption of a return to stability will face off against the new government with strong demands of the swift stabilisation of the nation’s security and economy.