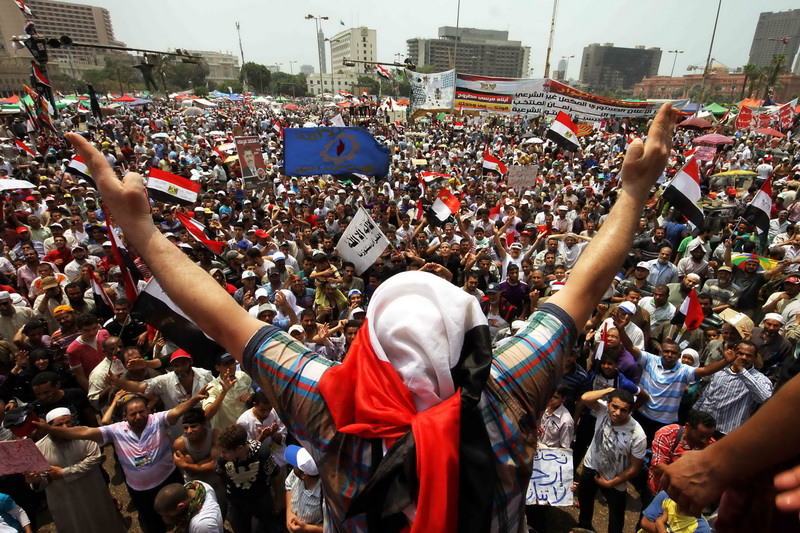 Egyptian, Syrian, Palestinian and Muslim Brotherhood flags, tents and effigies litter Tahrir square while tens of thousands of Egyptians anxiously wait around them for election results that they feel have taken too long to come. Chants that had once been crafted for Hosni Mubarak have made a comeback, tailored for the new times, “leave means go, you who do not understand”.

Muslim Brotherhood supporters are buckling down for what they anticipate might be an attempt on the part of Egypt’s military rulers to steal the elections from their candidate, Mohamed Morsi. Crowds have been gathered in Tahrir since Thursday, a signal to the Supreme Council of Armed Forces a continuing core of resistance to military rule that has endured for nearly 17 months.

In recent weeks, SCAF has delivered a spate of decrees that dissolved the Islamist-dominated parliament, limited presidential powers, expanded military powers over public life and gave the military generals oversight of drafting the constitution.

Meanwhile crowds gathered in Nasr City on the outskirts of Cairo in support of SCAF and at times Shafiq, but mostly in skepticism of the Muslim Brotherhood’s promises. Thousands gathered in Manassa near the Unknown Soldier Memorial, across the street from the military stand where President Anwar Sadat was assassinated in 1981. One supporter on twitter highlighted the fears of those gathered there: “I am going to manassa because it’s the same place where ekhwan [referring to Muslim Brotherhood] killed [former president] Sadat… wakeup Egypt”.

The subsequent years of arrests and executions of leaders of political Islam in Egypt in retaliation for Sadat’s assassination were found in Tahrir again where the ghosts of Egypt’s pasts hung heavy in the air. A sign condemning the flexing of SCAF’s powers bobbed in the crowd under a limp effigy of a dummy in military clothing: “The supplementary constitutional decree is illegitimate. We are against the dissolution of the elected parliament. Don’t mess with the legitimate Constituent Assembly”. A small pick-up truck plastered with signs from the campaign of Mohamed Morsi wove through the crowd playing music.

Resentment against SCAF is also exacerbated by delays in an official announcement from the Presidential Electoral Commission regarding the ultimate winner of Egypt’s presidential elections. The PEC has been accused of delaying results to find a way to declare former Mubarak Prime Minister, Ahmed Shafiq the winner. Human rights observers are concerned that an unfavourable outcome may spark violence between pro-Morsi crowds and the military. A chant was sung for Mubarak’s imprisoned son Alaa: “Alaa, tell your dad that Shafiq’s place is next to him”.

Recent reports have thinned the gap of votes between the two candidates to less than a million, with the Muslim Brotherhood putting their candidate in the lead and Ahmed Shafiq slinging accusations of wrongdoing against his opponent. Meanwhile Egyptians anxiously wait for a result to months of elections wrangling. Ibrahim, a man in his late 50s has been sitting in Tahrir for three days, he said he voted for Morsi because he “didn’t want the corruption of the old regime to return”. Ibrahim is sure that Morsi has already won and that the PEC is “playing games with the people to force concessions from the Brotherhood”.

A sign held high, seconded Ibrahim’s vote, “All the honourable people are with you Dr. Morsi, signed the family of martyr Haitham Hamida”. Meanwhile a young Egyptian on twitter headed in a different direction from Tahrir, towards Manassa, messaging: “I’d rather die next to that tomb [Unknown Soldier Memorial] than see morsi kill my country.”