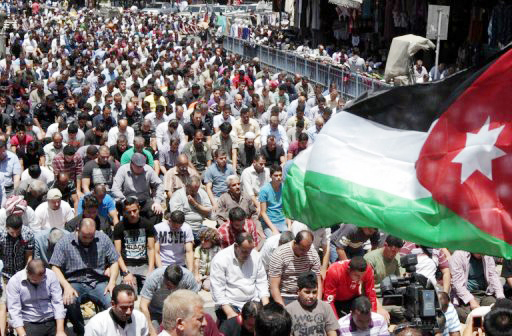 Opposition parties in Jordan are furious over a new elections law endorsed by parliament that gives every Jordanian voter two votes, one for a local candidate and another for political parties on a closed proportional representation list.

For opposition groups demanding 50 percent of seats, the allocation is simply not enough.

The Brotherhood will meet Thursday in an emergency Shura Council meeting to finalise their decision, but observers like Taylor Luck, senior editor of The Jordan Times, are confident they will follow through on the announcement. “Thursday’s meeting is just a formality” he said in a phone interview. “A lot of people will be boycotting if the elections are held under this law”, Luck said. He thinks that voter participation will be very low, especially with many people’s disenchantment the election law and parliament itself. Luck says that voter turnout in the 2010 parliamentary elections was low; he expects it to be even lower this time.

Following the endorsement of the law, opposition groups including the Muslim Brotherhood took a stand; they would not take part in the elections. Opposition members and activists have taken to the street last Friday in the latest protest of the law which they were hoping would not be endorsed by the Upper House of parliament. Some of the protesters demanded that parliament is dissolved, the Jordanian Times reported.

Opponents of the law find it unfair saying that it is no different than the 2001, one person one vote electoral system, the Muslim Brotherhood did not boycott the 2003 parliamentary elections which were governed under this system, they gained 16 seats in the 110 seated parliament at the time.

According to Al-Monitor news service, the Muslim Brotherhood has recently been courting the “Palestinian bloc” in Jordan which represents over 40 percent of the Jordanian population. It has been the largest voting bloc for Islamists in Parliament, but has been sitting on sidelines during the year and a half long protests which swept Jordan following protests in other Arab countries.

The election law is not the only reason the Jordanian government is being scrutinised by the public. Protesters took to the streets earlier this month decrying the austerity measures recently taken by the government which saw very large increases in the price of electricity and fuel.

According to The Jordan Times, protestors demanded the resignation of the Prime Minister, Fayez Tarawneh amid dismay over the price hikes which the government claims are needed in order to avoid an economic crisis caused by a large and increasing budget deficit. Jordan has been relying heavily on foreign aid to try and overcome its budget deficit which is almost JD 3 billion estimated to be 10.4 percent in 2011, a rise from 7.4 percent in 2010. Experts are saying that it could rise to JD 4 billion by the end of the year, according to Jordanian officials cited by Reuters.