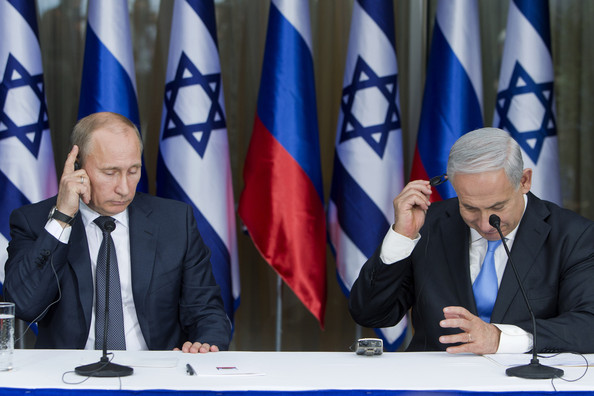 leaders on a rare trip to the Jewish state for discussions that focused on continuing violence in Syria and Iran’s disputed nuclear programme. In statements to the press after their meeting, praised ties between their two countries, and pledged cooperation on a range of domestic and international issues.Their talks touched on the situation in Syria, where a bloody uprising has divided the international community, pitting the West against Moscow, which has refused to support sanctions against its Soviet-era ally.

“From the very beginning of the so-called Arab Spring, Russia has been persuading its partners that democratic changes should take place in a civilised manner and without external intervention,” Putin said.

Russia is pushing for an international Syria conference and has already discussed the plan with Jordan as well as the European Union, Iran and Iraq. And it has shown little enthusiasm for regime change, despite multiple international calls for President Bashar al-Assad to step down. Putin said he had also discussed Iran’s nuclear programme with Netanyahu, but gave no details about the talks. Israel and much of the international community believes Iran’s nuclear programme masks a weapons drive, and the United States has led a push for tough sanctions against Tehran.

Israel, which is widely believed to have the Middle East’s sole if undeclared nuclear arsenal, has said Iran’s programme poses an existential threat and has warned it reserves itself the right to use all means necessary to respond, including military. Lebanese soldiers cordon off the area around the Russian Embassy in Beirut ahead protests over Moscow’s role in Syria.

Speaking alongside Putin on Monday, Netanyahu again warned that Iranian nuclear weapons would pose “a severe danger, first and foremost to Israel, but also to the region and entire world.” And he repeated Israel’s longstanding demands for Iran to cease nuclear uranium enrichment, remove enriched uranium from Iranian soil and dismantle the underground facility near Qom.

The international community has been pursuing talks with Tehran in recent months, but three high-level meetings — the most recent in Moscow — have failed to produce any breakthroughs. The P5+1 group (Britain, China, France, Russia and the United States plus Germany) has agreed to another round of discussions in Istanbul on July 3, but Israel has warned that lengthy talks give Iran time to continue uranium enrichment.

Earlier, Putin joined Israel’s President Shimon Peres at a ceremony in the northern city of Netanya, where one in three residents is originally from the former Soviet Union. The two leaders inaugurated a memorial to the role of the Red Army during World War II. “I am confident that Russia, which defeated fascism, will not allow today’s threats to continue. Not the Iranian threat. Not the bloodshed in Syria,” Peres said during the ceremony overlooking the Mediterranean. Putin said the monument would serve “as a reminder that the world is still fragile and we should do our best in order for the criminal Nazi doctrines, no matter what form or shape they take, to be left in the past.”

World War II veteran Boris Kagan, 87, attended the ceremony in uniform. Kagan, who emigrated from Ukraine to Israel in 1990, expressed hope that ties between Israel and Russia would improve with Putin’s visit. “We have to be friends,” he told AFP, praising the memorial.

On Tuesday, Putin is to meet with Palestinian president Mahmud Abbas in the West Bank city of Bethlehem for talks likely to focus on the stalled peace process. The peacemaking Quartet, which groups Russia, the United States, European Union and United Nations, has been trying to nudge the two sides back to direct talks, on hold since late 2010. But little progress has been made, and the Palestinians have insisted on a settlement freeze before talks resume, while Israel calls for new discussions without preconditions.

Putin last travelled to Israel in 2005. His predecessor at the Kremlin, Dmitry Medvedev, visited the West Bank and Jordan last year.