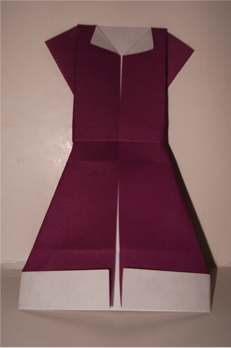 Origami is the Japanese art that takes an ordinary medium such as paper, and transforms it into an extraordinary shape. The name itself holds no hidden secrets – the Japanese word origami literally means folding paper. The practice started in the 17th century in the Far East and has spread around the world since the early 1900’s. This modern art form uses only the most basic of materials: coloured paper. No scissors, glue or colours are added to create the intricate designs.

For those who are looking for a small oasis of peace amidst all the turmoil of daily life, an Origami class will start on 25 June in Darb 17 18, under the tutelage of Nervan Talha. The class consists of five workshops, to be held on five Mondays, ending on 23 July.

Talha is a self-taught Origami instructor who first came in contact with this delicate art form that requires precision and patience on the Internet. Nervan Talha spoke to The Daily News Egypt about her passion for Origami which she says captured her interest because it was easy and affordable to find the raw material needed to practice this inspiring and creative art. “You don’t need special paper,” Talha explained, “you can use any old paper, like last year’s school books, or even a newspaper to create an unlimited number of shapes.”

Talha was a web designer before she became an Origami teacher and currently combines her teaching with working with kids. “We chose the dates for this current workshop specifically so that kids can join during their summer break.” Talha will be teaching two groups during the course of this workshop; one for young people aged from 16 to 20 and a second class for those older than 20.

“We’ve all practiced Origami, we just don’t realise that is what it is,” Talha claims. “We’ve all folded paper into shapes like boats and hats, and this is Origami in its very basic form. What I teach in the workshops is a bit more advanced and sophisticated of course,” she reassured. One of the things Talha loves about Origami is the simplicity and logic of the art.

Origami is based around the use of three or four most commonly used shapes such as a circle, triangle or rectangle, to create
unlimited varieties of shapes.

Talha’s favourite moments as an instructor are when she shows children how to fold with her step by step guidance until they have created their final shape. “Sometimes children can’t believe that they’ve done it themselves or that they’ve done it so quickly, they think because the shapes look so intricate they are very hard to create. They love it when they hold the end products in their hands.”

Talha has ambitious plans for the future: “I hope to start giving free workshops in governmental schools soon. And who knows, maybe I will be selling my art some day in the future,” she concludes.