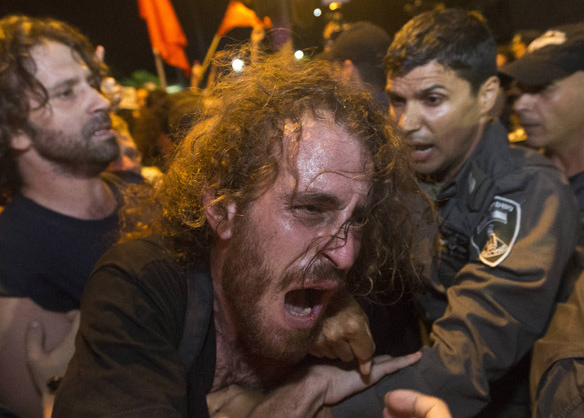 More than 100 people were arrested on Friday and Saturday following attempts by Israeli social justice activists protesting the high cost of living to build a protest camp in an upscale neighbourhood of Tel Aviv.

Thousands of protestors were met with a heavy police response in a neighbourhood that has been a site of previous sit-ins to demonstrate against wages, as well as food and home prices.

Clashes broke out between the police and protestors and activists blocking a street and a highway in Tel Aviv as well as attacking banks.

The demonstrators congregated a day after a similar protest led to several arrests. More than 80 were arrested on Saturday, 37 of which were charged.

On Friday, activists – including well-known social justice advocate Daphni Leef who largely inspired last year’s movement – took to the streets in an attempt to set up tents but were met by arrests. Officials said the protest was not licensed. While the police claim to have been attacked by protestors, the protestors accuse the police of using excessive force. Leef, considered a leader of last year’s social justice movement, was arrested on Friday, as demonstrators gathered around a police car in an attempt to prevent police from arresting her. Leef says police bruised and taunted her. She is currently on bail, according to the AP.

Only a week earlier, on Saturday June 16, Leef and a group of activists attempted to set up tents but were thwarted by municipal inspectors, according to Haaretz. news service. Demands include reforms to the healthcare system, better and cheaper education, and lower costs of living. Protest camps initially set up in Tel Aviv but quickly spread to other cities across the nation. The movement, started by youth, has grown in demographics and size.

Similar sit-ins, accompanied by several massive rallies, occurred in Israel last July. In September, more than 450,000 across Israel took part in a similar social-justice themed protest, making it the biggest in the history of Israel.