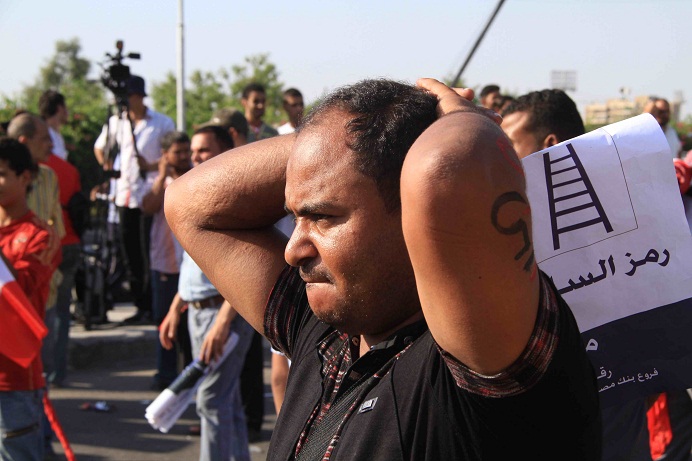 Within fifteen minutes of the announcement that Mohamed Morsi had beendeclared the winner of Egypt’s election, 11 telephone

numbers belonging to communication officers in Shafiq’s campaign were all turned off or disconnected. Ahmed Shafiq supporters, who gathered since last night near the Memorial of the Unknown Soldier and the site of Anwar Sadat’s assassination in 1981, were stunned. A woman shrieked and fell to her knees, visibly upset by the news. Many in the crowd speculated that backroom deals between Supreme Council for the Armed Forces (SCAF) and the Freedom and Justice Party secured today’s announcement.

The crowds angered at prospect of an Islamist led Egypt turned on the symbol of the regime that failed them, a nearby tank, chanting “Death to the Field Marshall” and banging on the sides and windows. Persistent rumours circulated in the last three days of meetings between SCAF representatives and members of the Freedom and Justice Party including Saad El-Katatny, and even Mohamed Morsi himself.

The Egyptian news agency Al-Ahram reported on Saturday that the content of those meetings included discussions of possible candidates for the position of Prime Minister, with names like former International Atomic Energy Agency chief turned erstwhile Presidential hopeful, Mohammed El-Baradei being floated as an appeasement for those concerned about Islamist domination in government. Both SCAF, El-Baradei and the FJP denied such meetings or discussions.

Meanwhile, a planned press conference at Shafiq’s campaign headquarters in Dokki, was cancelled. Reporters milling outside complained that his spokesperson seemed to have “vanished”, no one who normally answered the press was answering their phone. Reports emerged that supporters of Shafiq were ripping down posters for the campaign of Mohamed Morsi and in some places were chanting, “Morsi-stan Ya Afghanistan” illustrating the fears of Shafiq supporters that Morsi will herald the rise of the Islamisation of the identity of Egypt.

At the site of the memorial a group attempted to form a chain linking hands and crossing from the military parade to a pyramid edifice across a busy road. They were unable to stop the cars that whizzed past them.