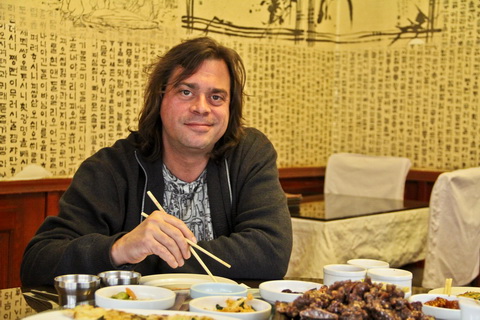 The Chinese, generally speaking, are disgusted by our eating habits. By “our” I mean “us”—us Indians, Persians, Arabs, Europeans and Americans; us westerners out past the Himalayas and the Gobi desert; us barbarians who are totally beyond the bounds of Chinese cooking and thus, by definition, beyond the pale of civilisation.

They think we stink of milk. They abhor cheese—that putrefied mucal discharge from cow intestines. Could anything be sicker?

True, we balk at the stir-frying of the occasional cat, but the consumption of cheese—the unavoidable byproduct of an otherwise noble beast—is, to the Chinese mind, a sure sign of the depravity of an unwashed people, a heinous culinary crime second in degree only to the abominable habit of eating raw salad. (“It’s true man; I saw ‘em do it.”)

Ah well, we too have our prejudices (beginning with the aforementioned cat). Or with the idea that the venerable Cairo restaurant Peking serves Chinese food. It does not. Primarily because there is no such thing as Chinese food, not in China anyway.

In China you can chow down on dim sum (Canton), dan dan noodles (Szechaun), steamed fish heads (Hunan), or nine-coil large intestine (Shandong): but these are regional delicacies.

There is no Chinese as such. “Chinese food,” as we know it, exists only beyond the mountains in the exotic and uncultivated lands of the far west.

So where does that leave us barbarians? With some good eats, for sure, but of an entirely twentieth century, mixed up, global variety.

For many years I renounced Chinese food here in the Big Mango because the choices are limited. I drifted towards Japanese, Thai, Vietnamese when I could get it. And I didn’t like or couldn’t afford the Chinese options. Peking is placid to my tastes; Spice at the Four Seasons over-priced, pretentious, not that spicy. The new Chop Chop in Giza is good, more pan-Asian than Chinese, but also a bit rough on the wallet.

I have since discovered that there are a number of authentic, affordable Chinese options in Maadi, home to the ex-patriate Asian community. At the top of the list is China Winds, where you can get some truly weird “Chinese” dishes such as pickled chicken feet (disgusting), lily bulb soup (sickly sweet), or braised camels’ hooves (not bad at all, tastes like Portobello mushrooms).

Beyond that there is some good food in various down-at-heel places that I will review at some point, but they are far too hygienically challenged for your average, “well-done please” Cairene.

It too is a westernised Chinese idea—or maybe you could call it pan-Asian; since you’ll find a curry and a teriyaki sauce—, but like I said, for the most part, only westernised versions of Asian are on offer in this part of the world, and for all that, Mr. Wok delivers fresh, clean, original, sexy, street food: quick, a good value, filling, and yummy.

When I jumped in last week it had just opened up. It was a soft opening. I love soft openings. Gives me the chance to sample the goods first.

If they would have allowed me to pop a Tsingtao beer I would have been in ex-patriate Chinese nirvana.

The food was excellent thanks to executive demigod designer chef Wesam Masoud.

I chose egg noodles, the duck, naturally, Chef Masoud’s house sauce (go for that one), shittake mushrooms. It was a light touch, as it should be. Just what the doctor ordered. They placed quality soy and chili sauce on the table, but screw that noise: It’s like putting milk and sugar in your espresso. Enjoy the delicate flavours as they are meant to be enjoyed.Don’t mess with mother nature.

Mr. Wok is a winner. He talks the talks and most assuredly woks the wok. Yeah, baby. Just gimme a kiss, like this.