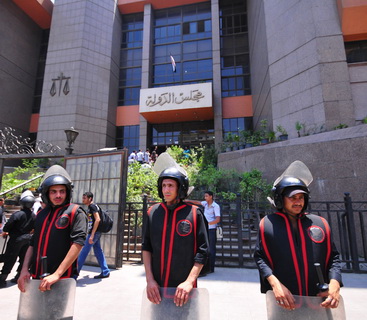 The Supreme Administrative Court of the State Council, headed by Judge Ali Fikri, overturned the Justice Minister’s decision to grant military police and intelligence the right to arrest civilians on Tuesday.

The ruling declared that the Justice Minister’s decisions violated constitutional principles from Egypt’s 1923 Constitution all the way to the March 2011 Constitutional Decree.

“The court finds that this decision is seemingly merciful but in its essence there is torture,” read the final verdict. The ruling restricted the right to issue arrest warrants to the police, judiciary and certain public officials as long as they are civilians, thus barring any military personnel or institutions from arresting civilians.

“The Justice Minister has usurped the authority of the constitutional legislator and issued a decree without the right to do so,” the verdict went on. Justice Minister Mohamed El-Gendy had granted this power to military police and military intelligence officers and soldiers just a few days before the start of the runoff round of presidential elections.

“This is a historic ruling that confirms the role the State Council has over monitoring and fixing the performance of the executive branch, especially in transitional periods such as these,” said former presidential candidate, activist and lawyer Khaled Ali.

Ali was one of many plaintiffs who brought this case before the Supreme Administrative Court following the Justice Minister’s decision. “In his 16 page ruling the judge said that the decision had violated the constitutional principles underlined in all of Egypt’s constitutions from 1923 to 2011, affirming the value of human rights,” he added.

Mubarak had used the law to quell dissent and punish political rivals over the years, and ever since his ouster the ruling Supreme Council of Armed Forces has followed suit. Over 16,000 civilians are currently serving jail sentences after being tried in military courts. SCAF claims that military courts were faster and more effective than civilian ones. Many of those sentenced to prison by military trials had been protesters participating in anti-military demonstrations. Military trials have lower chances of being overturned on appeal and result in considerably harsher sentences than civilian trials.

The No Military Trials for Civilians movement has issued a statement calling on President-elect Mohamed Morsi to pardon civilians that have already been tried in military courts. Tuesday’s decision is significant. Coming after the expiration of the emergency law, it means that Egyptians will for the first time in almost 60 years, be tried strictly in civilian courts and will face no extra-judicial arrests or trials.