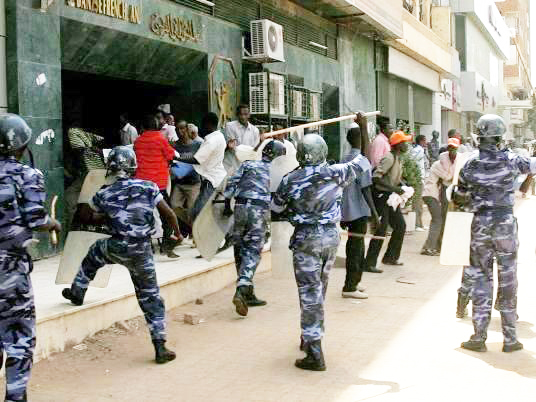 Unrest in Sudan over austerity measures has gone beyond Khartoum University and is now threatening to topple the government. The protest, which spread to other universities and parts of the country, throughout the last ten days, continue to decry the stringent austerity measures but are now also demanding a regime change.

Despite the unrest, the Sudanese government is vowing to keep the month-old austerity measures in place. Sudanese Finance Minister, Ali Mahmud Al-Rasul, said on Monday that the controversial decision to partially lift fuel subsidies will not be reversed. The recent austerity measures taken by the government have included raising taxes and deep cuts to services like public health care.

The government response to the protests, which started on 16 June resulted in a violent crackdown on protesters along with rhetoric by government officials that dismissed the demands of the protesters. Dozens of protesters have been arrested, fired on with tear gas, beaten by plain clothed police men and attacked with batons, iron clubs and machetes.

The repression has also spread to journalists. At least two foreign journalists and one Sudanese blogger have been arrested, among them is Egyptian journalist for Bloomberg News, Salma El-Wardany, who was arrested and questioned by Sudanese officials for five hours without being charged, El-Wardany was deported from Sudan on Tuesday. Weeping, she told AFP by telephone from Khartoum airport, “They ordered me to leave”.

Girifna, which means ‘enough is enough’, has been leading much of the non violent resistance in Khartoum. In the event the government shuts down access to internet, Girfina has begun publishing manuals off their facebook page to prepare their supporters.

Last Friday, demonstrators took to the streets across Sudan in what they called “Sandstorm Friday”, which was a large-scale protest that began after Friday prayers and continued late into the night. Thousands of peaceful protesters were met with force including police and tear gas at them.

Protests have been planned for this Friday, in a rally that is being called ‘Elbow-licking Friday’, which is planned to be followed by a day of a civil disobedience immediately after on Saturday, a day which coincides with the 23rd anniversary of the ruling party, the National Congress Party (NCP). The offices of the NCP in the town of Al-Gedarif were burned down by protestors following intense clashes between demonstrators and police on Sunday.

This is not the first wave of protests to hit Sudan. Following the onset of protests in Egypt and Tunisia last year, protests in Sudan have appeared sporadically over the past year and a half. The scale of the most recent protests are unprecedented and have expanded to include efforts to remove President Omar Hassan Al-Bashir – who has been ruling Sudan since 1989.

The split has taken a heavy toll on the country’s economy which lost most of its oil revenue following the separation and has a failing currency, a shortage in dollars, and an annual inflation rate of 30.4 percent as of May. The bankrupt country has a budget deficit of $2.4 billion and recently split from South Sudan last year after a nationwide referendum.