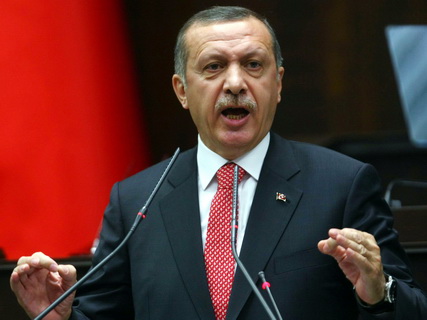 The Turkish prime minister fired the latest salvo in an escalating standoff with Syria yesterday, presenting his case for the ‘clear and present danger’ associated with Syria’s downing of a Turkish jet, as the Turkish military amassed a large contingent of arms and personnel along the Syrian border.

“Our rational response should not be perceived as weakness, our mild manners do not mean we are a tame lamb,” Prime Minister Recep Tayyip Erdogan said as he addressed the Turkish parliament in Ankara. “Everybody should know that Turkey’s wrath is just as strong and devastating as its friendship is valuable.”

The Turkish military deployed a large convoy of tanks, long-range weapons, and armored personnel carriers yesterday to the Syrian border following Prime Minister Recep Tayyip Erdogan’s terse and stern speech. Erdogan said his country was altering the rules of engagement with its southern neighbour and vowed to “retaliate” against any acts of aggression and “border violations.” The move came as NATO, at Turkey’s request, convened a special session to address the incident. NATO members released a statement following the session, calling the incident “unacceptable,” while vowing to “stand together with Turkey in the spirit of strong solidarity.”

Tensions between the two nations have been at an all-time high after the Syrian military shot down a Turkish reconnaissance plane on 22 June and claimed it violated Syrian sovereign airspace. Turkish officials refute the claims made by Syrian officials in regards to the incident, pointing to evidence that the plane was fired upon in international waters.

Furthermore, Turkish officials said proper protocol and standards to alert the plane that it had entered Syrian airspace had not been followed. On Monday, Turkish officials claimed Syria once again fired on jets searching for the pilots of the downed jet, who are believed to be dead. Erdogan said Turkish airspace had been violated five times by Syrian helicopters, but all of the incidents were resolved peacefully and within international protocols.