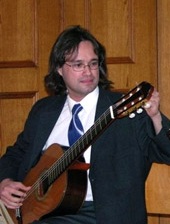 Some of you may be surprised to learn that music is a lot more diverse than thumpity-thump and beepity-bop.

Even in the heart of House-crazy Cairo, there are isolated pockets of underground resistance that remember the days when music was made with instruments and computers were for serious work and Solitaire.

One of the bastions of this resistance movement is the Cairo Opera House, which makes it a point to class up our fair city with performances of almost every imaginable type. In this particular instance the Opera House, in coordination with the Instituto Cervantes de El Cairo, strove to bring us the very best with its Week of the Spanish and Iberoamerican Classical Guitar. A mouthful to be sure, but a week of some of the world’s finest classical guitarists is nothing to scoff at.

Walking into the darkened hall, I was greeted with a soulful accompaniment, hauntingly mournful and so slow that at times I was about to stop and clap before hearing the next note. As I took my seat the lights were dim, the crowd hushed and the spotlight was on Gabriel Guillen of Brazil.

Guillen appeared to be in a trance of sorts. His eyes were tightly shut during some parts and when I later inquired about this, he complied. “It is not just for concentration,” Guillen told me later, in the lobby of the hotel he was staying in. “If I open my eyes, I will play like an automatic machine. I want to see the audience, feel what they feel and make some improvisations.There is a lot of emotion.”

The music he had chosen to begin with was heartrendingly romantic and I sorely wished I was one of the score of nuzzling couples, with a hand to hold rather than a dishevelled reporter who sat in a corner scribbling in the darkness and smelling faintly of Twinkies. The music not only strummed my heart-strings, but parts were also vaguely familiar. I learned why later that evening.

“I have been listening to Egyptian radio for some time now, especially the old things,” laughs Guillen amiably. “It is so beautiful; I love the ambience it creates. Any place with a big history like here has to have amazing music. Maybe one day I will learn to play the instrument [the oud].”

Suddenly the whole tempo of the music changed, and I was in a festive Latin American country, dropped into the middle of a carnival, dancing insanely to the beat of the street drummers, watching Jerry lead Tom on a long and merry chase while Antonio Banderas made love to a comely South American wench under the hot desert sun. The playing had not only turned upbeat but almost comical, with Guillen himself smiling widely and tapping his feet to the rhythm. His fingers flew deftly up and down the neck of the guitar, every so often lingering a moment to deliver a particularly powerful note.

This, Guillen told me, was a result of his childhood inspiration. “Before I knew a lot about guitar, my biggest inspirations were the street musicians. There are a lot of them and they are always happy. I saw them and told my mother to buy me a cuatro, like a small guitar with four strings. I wanted to sound like the street musicians. Later, of course, I got to know more famous guitarists, like the legend Andres Segobia.”

The final act of Guillen’s musical masterpiece tossed aside love and playfulness in favour of adventure.With plenty of fast-paced sweeps and a vivid, passionate sound, the music sat me astride a frothing, powerful horse galloping off into the sunset in pursuit of bandits, with six-shooters ablaze.

His set finished, Guillen stood up to greet the thunderous applause that assailed him. With a capacity of perhaps 400 people in total, the hall held maybe a quarter of that, yet the applause rang loud and honest for a good five minutes.

His job finished and our appetites satiated, Guillen walked off-stage with a grin.