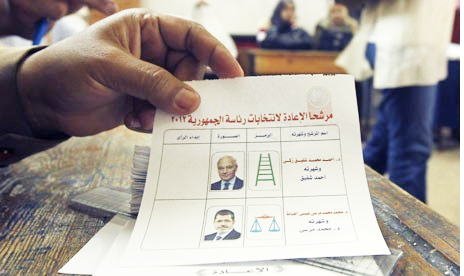 Those who abstained from taking part in the run-offs of the presidential elections may have to pay a fine, EGP 100. Secretary-General of the Presidential Elections Committee (PEC), Hatem Bagato, first suggested fines for boycotting earlier this month, saying those who did not vote in Egypt’s elections could be penalised EGP 500 in fines, according to the state-run news service, Ahram Online.

Understandably, the decision angered boycotters who feel they could be penalised for a political position. There are also people who did not vote simply because they could not, did not have the time, or could not afford to reach polling stations located far away.

A similar decision to fine those who refused to take part in the parliamentary elections – which ran from November 2011 to January 2012 – for the amount of EGP 500 was proposed, however, it was never enforced.

Shahira Abu El-Leil, co-founder of the group No To Military Tribunals of Civilians and among the most active advocates for urging eligible voters to boycott the elections, thinks the decision to fine abstainers fails to take into account one very large challenge. “It will be very difficult to implement because the majority of the people did not vote,” she said.

According to official PEC numbers, more than 50 percent of those eligible to vote – around 26 million people – voted in the final round of elections to choose the President. Abu El-Leil thinks those numbers are quite optimistic. “Based on our calculations, in order for this many people to have voted, the turnover in the polling stations would have to be between 100 and 160 voters in every polling station and this is not what we were seeing,” she said.

While the official voter turnout in the first round of the presidential elections was 46 percent, observers expected the turnout to be lower in the run-offs. Observers believed voters would have been more likely to stay home in larger numbers during the second round because they were disinclined to vote for a candidate they did not choose in the first round. Abu El-Leil believes the percentage of voters was falsely estimated at 52 percent in order to give the elections “legitimacy.” Asked what she and other boycotters might do if the decision to fine non-voters is codified, Abu El-Leil said she did not expect the decision to be applied and added, “we would try to take some action against it, we might even take to the streets.”

Using PEC figures, 26,420,763 votes, including invalid votes, were cast in the second round. With a total number of eligible voters at 50,958,794, that would mean some 24,538,031 voters could potentially be fined. If those who did not vote are fined, then the Egyptian government could expect to collect almost EGP 2.5 billion. Should the fine be set at EGP 500, as Bagato once noted, the government could be collecting closer to EGP 12 billion, which amounts to a lot of reasons to enforce the fines.