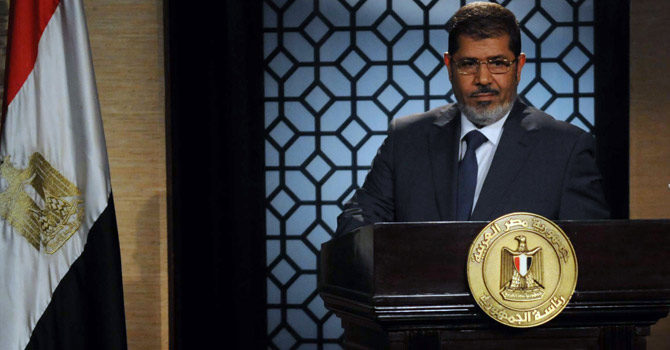 of public debate recently – will be known when the president’s office announces it today. Yasser Aly, the interim official spokesperson of the president-elect, said the matter was being studied with noted thoroughness in order to reach a solution which satisfies different national forces while also abiding by the law.

The past week has witnessed controversial statements about the setting of the inauguration, mostly by ex- parliamentary representatives for the Freedom and Justice Party (FJP). Most of the statements were concerned with whether Morsi’s swearing-in ceremony is legal, sparking ample debate after the Supreme Constitutional Court dissolved the parliament.

This article, as well as the entire decree, caused immediate protest from FJP members among other political forces. Constitutional expert and ex-parliamentary representative for the FJP Sobhi Saleh announced Monday that President-elect Morsi should swear the oath in front of the Supreme Constitutional Council, according to MENA. Saleh said he did not, however, want to acknowledge the dissolution of parliament as legal.

For his part, FJP’s Saad Al-Hosseini told state-owned Al-Ahram that President-Elect Morsi will not waive his right to take the republican oath in front of parliament. He also said the FJP refused to acknowledge the dissolving of parliament.

Constitutional expert and professor at Cairo University Dr. Ra’afat Fouda told the Daily News Egypt swearing in front of any legislative or judicial body other than the Supreme Constitutional court – be it parliament or elsewhere – would nullify any action taken by the president after his inauguration. “Swearing the oath is the start of practicing presidential acts in countries running under a presidential system,” Dr. Fouda said. “Thus, should President-elect Morsi take the oath anywhere but the Supreme Constitutional Court – as issued in SCAF’s decree – it would nullify any future presidential acts. Yet, it would not nullify the results of the presidential elections.”