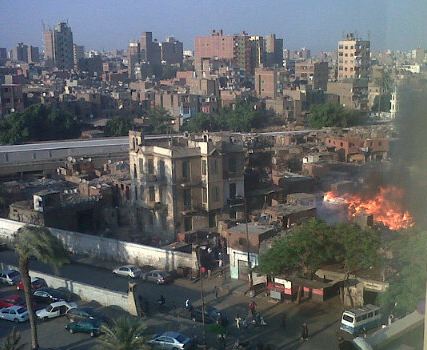 Reports of a mob gathered around Nile City Towers complex in downtown Cairo claim that the crowd is threatening violence if the Towers are opened for business today.

According to reports circulating on social media, a fire broke out Wednesday evening in the vicinity of the Towers complex. The area is primarily composed of ashwa’iyat or illegal and neglected slums.

The fire department was delayed in its response, according to witnesses. When residents asked for aid and equipment such as extinguishers and fire hoses from the better-equipped Towers staff, the security staff refused to offer assistance or support.What has motivated the mob to protest in anger are reports that a man lost his four-year-old son in the blaze.

According to reports online and on twitter, gunshots have been heard in the area although the same the reports insist that the crowd has not become violent and is simply surrounding the mall building demanding it remain closed today.