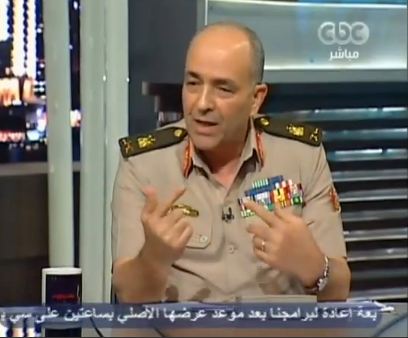 President-elect Mohamed Morsi will have full executive powers once he is sworn in, members of the ruling Supreme Council of Armed Forces have said.

In an interview on independent broadcaster CBC on Wednesday, SCAF Major Generals Mohamed El-Assar and Mahmoud Hegazy said the supplementary constitutional decree recently released by the military council would not limit Morsi’s powers in any way.

According to El-Assar, there is no truth to the notion that SCAF will be picking the “sovereign ministries” of Defence, Interior, Foreign Affairs and Justice in Morsi’s next cabinet and that he is free to appoint whomever he pleases.

Yet, when asked about who the next Minister of Defence would be, Hegazy said it had to be the current Defence Minister and SCAF head, Field Marshal Hussein Tantawi.

The generals said SCAF was in no way interested in extending its stay and all members of SCAF, especially Tantawi, had initially hoped to hand over power to civilians within six months of assuming control of the nation’s transition following the ouster of former President Hosni Mubarak.

According to Hegazy, liberal parties feared the strength of Islamist groups and asked SCAF to postpone elections twice, once from June to September 2011, and then again from September to November 2011.

SCAF has recently dissolved the People’s Assembly, parliament’s lower house, after a Supreme Constitutional Court decision ruling found the parliamentary elections law unconstitutional. Still, Hegazy claims SCAF was reluctant to see the dissolution through. “We never wanted the PA to be dissolved,” he told the host.

He added that SCAF was proud of its handling of Egypt’s ‘free and fair’ parliamentary elections and that it had hoped come 30 June it would hand over all power to a civilian-led government.

The new constitutional decree gives SCAF legislative power as the de facto parliament until a new one is elected, which will not be before a new constitution is drafted.

“The legislative power we will hold will be very limited,” Hegazy said.”We will stick to passing laws suggested by the cabinet and will not draft our own.”

He said the president still had the power to sign laws into effect and could silmilarly reject any SCAF designed legislation.

The parliamentary elections law the SCC ruled unconstitutional was written by SCAF. According to Hegazy, the law initially gave only independents the right to run for a third of PA seats reserved for individual candidates and not those affiliated with party lists.

“Several political parties understandably feared the use of this quota by former regime candidates and asked us to allow parties to contest all seats,” he said.
The SCC ruled the decision unconstitutional, which led to the PA’s dissolution.

Hegazy argued most of the victims in the cabinet building protests last December were people who were not on the front lines and as such could not have been shot by soldiers. He did not mention the Maspero or Mohamed Mahmoud incidents.
“One of the things we are most proud of is that our hands have been untarnished by Egyptian blood for the past 18 months,” Hegazy said.

The generals had advice to what they called Egypt’s two big political groups.
“We have the Islamists and the liberals. The liberals need to strengthen themselves in terms of popularity so we can have balance in Egyptian politics. The Islamists need to calm the people; they need to assure Coptic Christians, liberals, artists and intellectuals that their rights are guaranteed,” said Hegazy.

“President-elect Morsi has been doing a good job with regards to that,” he added.
The generals also affirmed their respect and love for the January 25 Egyptian revolution.

“The revolution is genius. I cried when I hear the election’s results because we finally had a democratically elected president and no one knew the results before the official announcement,” said El-Assar.