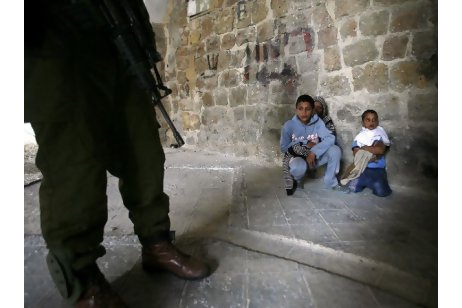 Israel is in breach of the United Nations Convention on the Rights of Children by violating the rights of Palestinian children through their detention practices on multiple occasions, according to a delegation of British lawyers backed by the United Kingdom’s Foreign Office.

The delegation released a report, Children in Military Custody, citing Israel’s breach of “articles 2 [discrimination], 3 [child’s best interests], 37(b) [premature resort to detention], (c) [non-separation from adults], (d) [prompt access to lawyers], and 40 [use of shackles] of the UNCRC.”

The announcement comes in the wake of the sentencing of six Palestinian minors, who are between the ages of 14 and 16 years-old. The minors have been in detention since April 2011, when they were younger than 13 at the time of the arrests. Sentences ranged from five to 12 years along with a sizable fine.

The fines attached to the crimes are usually quite heavy, said Hassan Shobeitah, the Palestinian official in charge of monitoring Israeli treatment of prisoners. He said, if not paid on time, the fines result in another year and a half of jail time added to the minors’ sentences.

While, according to international law, a state should not discriminate between children from different nationalities or races, the report showed a clear difference between the treatment of Israeli and Palestinian minors. Several actions taken by the Israelis, such as solitary confinement (which is in many cases construed as torture), coerced confessions and physical violence are all forms of treatment minors were subjected to while in Israeli custody.

The report concluded that the Israeli state operated on the belief that every Palestinian child was a “potential terrorist,” which has led to the court system enforcing what the authors have dubbed a “spiral of injustice.”

The Israeli Embassy spokesperson in London, Mr. Amir Ofek responded to the reports by the British lawyers stating , “Israel appreciates the efforts of the lawyers’ delegation which visited Israel to learn about the challenges involved in dealing with minors involved in acts of militancy and violence.”

Ofek reiterated the position Tel Aviv has maintained in past when faced with criticism over its treatment of Palestinian minors by stating that the nation has been left with little choice, “Regrettably, such activities continue to be encouraged by official Palestinian textbooks and television programmes which glorify terrorism and suicide terrorists. As a result under-18 year olds are frequently involved in lethal acts, ranging from the hurling of boulders at civilians cars, to the murder of five members of a single family in their beds last March. With the Palestinian Authority unable or unwilling to meet its obligation to investigate and prosecute these offences, Israel has no choice but to do so itself.”

Ofek also highlighted that the report referred to some positive steps Israel has taken to alleviate trauma inflicted on minors through detention by raising the age of juvenile offense from 16 to 18, and establishing tribunals with special safeguards for youth offenders. Ofek did not respond to the claims of arrest of minors as young as 12, referred to in the report.