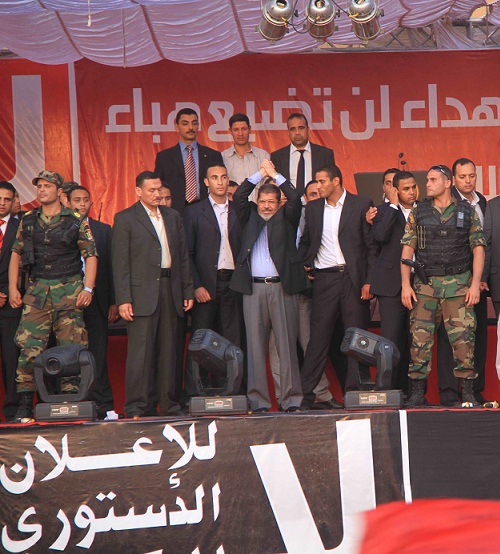 “It is both an honour and a big responsibility to be the president of Egypt,” he told the crowd before saluting the martyrs and the injured of the January 25 revolution and “all who made sacrifices for Egypt”.

“You are the source of all authority, power and legitimacy. It is you who give and can remove authority,” added Morsi, whose name the crowds were cheering. Morsi told the crowd he had come to them in Tahrir, the square of the revolution,  before addressing any other institutions or partaking in other procedures.

He then recited the presidential oath of office.

“I swear to God Almighty to faithfully protect the Republican system, to respect the constitution and the law, to fully protect the interest of the people, and to maintain the independence and territorial integrity of the homeland,” Morsi recited atop a stage in Tahrir Square- the control of which had been handed over to the military Republican Guard for security measures.

The president-elect found himself in a dilemma with regards to the oath; normally he would perform it infront of parliament, but shortly before his election the ruling military council dissolved the People’s Assembly, the lower house of parliament, after  a Supreme Constitutional Court ruling. The Supreme Council of Armed Forces then released a constitutional decree limiting the president’s powers, giving itself legislative authority, and requiring the president to take his oath infront of the SCC general assembly.

Ever since, thousands took to the streets and began a sit-in at Tahrir Square. The protesters, the majority of which are supporters of Morsi’s organisation, the Muslim Brotherhood, vowed not to leave the Square before the constitutional decree and decision to dissolve the PA were revered and Morsi enjoyed full presidential powers.

“I refuse all measures that limit the powers and rights of the people,” Morsi said today in reference to the SCAF decree. “I will oppose all such attempts because I am the decision maker thanks to you, and no one will take away that power. I will not give away any of my presidential powers because it is not my right to do so,” he added.

However, the president’s office released a statement late last night confirming that Morsi will indeed be swearing the oath infront of the SCC, a move many activists and revolutionary groups see as implicit acceptance of the military’s constitutional declaration.

Morsi attempted to strike a balance between popular legitimacy and the law in his speech, a middle ground that will displease many. “This does not mean that I do not respect the law, the constitution, the judiciary or any of Egypt’s patriotic institutions,” he said.

The president-elect made other promises in his speech as well. He promised to avenge the martyrs of the revolution and bring their families justice and that he “would not take this matter lightly”.

“I will work hard on improving our economy and ensuring social justice,” he added, addressing economic and political concerns.

Morsi also promised to work on releasing those incarcerated as a result of military trials. Military courts have sentenced an estimated 16,000 civilians to prison since SCAF took over following Mubarak’s ouster.

“I see today the family of Sheikh Omar Abdel Rahman; I promise to work on releasing him as well as all of those who were imprisoned here at home by military trials,” he said. Omar Abdel Rahman is the blind sheikh imprisoned in the United States on accusations of planning the first World Trade Center attacks in the 1990s.

Morsi ended his speech by saluting the crowd and reassuring them that the revolution is not over. “I support the continuation of this revolution; and when we need to, will see each other again right here in this very Square.”