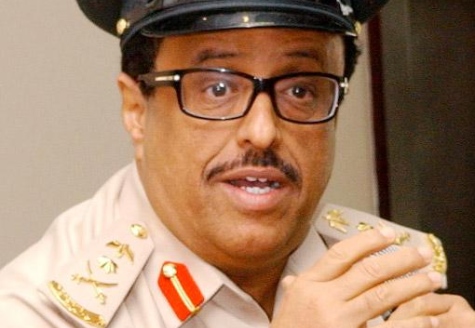 The Dubai police chief said on Saturday he received more than 1,500 death threats from members of the Muslim Brotherhood (MB) after he voiced his distaste for the group and its politics, following a months old dispute between the chief and Islamists.

This marks the latest war of words between Dhahi Khalfan, chief of police for Dubai, and the Brotherhood. Khalfan, who frequently voices his distrust of the Brotherhood, has been verbally clashing with the group since March.

In an escalation of the verbal attacks by both sides, the Egyptian Foreign Ministry called on the United Arab Emirates envoy to Egypt to clarify “statements that do not go along with the nature of the special relationship between the two countries,” MENA News Agency reported.

At noon, yesterday, Khalfan wrote a tweet stating he intended to host a press conference demanding the Brotherhood’s General Guide “to stop harming his country if he believes in God and the Day of Judgment.”He added he would give the press a draft agreement he wants the General Guide to sign.

The agreement states that the General Guide will not interfere in the affairs of the United Arab Emirates (UAE) so long as there would be a truce between the Emirati people and the Brotherhood.

Khalfan has frequently said he is concerned about the impact of the Brotherhood on the region. The organisation is a threat to the Gulf countries, he said. But his most recent attacks on the Brotherhood have been pointed. He made several ridiculing remarks about President Mohamed Morsi as he was giving his speech in Tahrir on Firday.

The dispute erupted when Khalfan suggested that Yusuf Al-Qaradawi, the Muslim scholar and Head of the International Union for Muslim Scholars, should be arrested by the Interpol. Following President Morsi’s victory, Khalfan wrote a message on Twitter describing Morsi’s election as “a failed choice with possibly dangerous consequences.”

Although the UAE congratulated Morsi on becoming president, Egyptians living in Gulf countries have faced a lot of harassment by Gulf regimes. Egyptian émigrés have a hard time renewing their work permits and continually face uncertainties about the duration of their visas while working in Gulf nations.