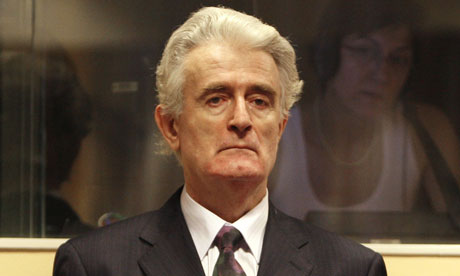 Radovan Karadzic came close to being freed of the charges facing him in the International Criminal Court. His defense team contested both counts of genocide brought against the former psychiatrist turned Serbian wartime general.

The Hague court where Karadzic has been under investigation for four years almost dismissed his case, citing a lack of evidence to support the charges brought against him for war crimes and crimes against humanity.

Among the charges brought against Karadzic are charges of orchestrating the massacre at Srebrenica in 1995, an incident in the 1992-1995 war between Bosnia and Serbia in which nearly 8,000 men and boys were rounded up and systematically killed.

Karadzic is also accused of orchestrating the siege of Sarajevo, a three and half year military operation which turned the streets of the capitol into a city terrorized by snipers and daylight assassinations, leaving, in all, more than 10,000 people dead.

The case was tied to the forced migration of nearly half a million non-Serb Bosnian as well as their deportation to “death camps.”

The violent campaign, which took place in the first year of the war, intended to “ethnically-cleanse” Bosnia of non-Serbs. It included mass killing of civilians and the razing of homes and religious sites of Muslims and Catholics who were not Serbian.

The challenge facing the prosecution was to establish that the forced migration and the razing of homes was genocide, which is defined as an effort to annihilate a distinct population, ethnic group or religion.

The dismissal of this charge comes half way through the trial, after the prosecution made its case of the two counts. The court decided on Sunday to dismiss this charge of genocide but plans to continue examining evidence of killings that occurred later in the war.

It is expected that evidence will be more plenteous as well, since the killings occurred, sadly, while NATO forces were present.