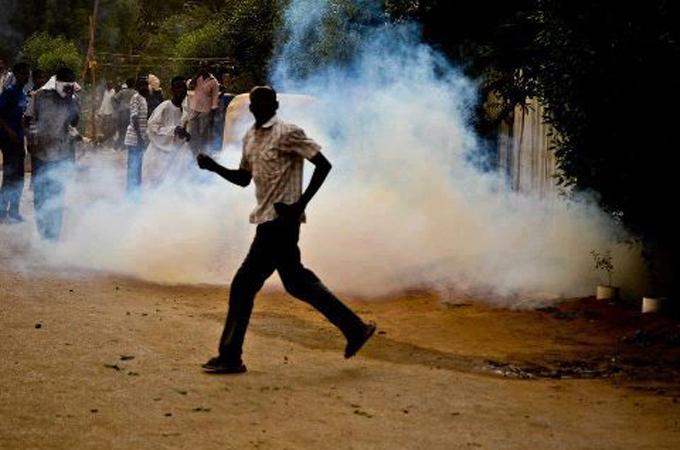 Hundreds of Sudanese protesters took to the streets of Khartoum and other cities last Friday calling for the ouster of President Omar Al-Bashir’s government in what they dubbed “Elbow Licking Friday.”

Security forces met the demonstrations with a violent crackdown that included the use of tear gas and batons as well as several arrests.

Protesters frequently chanted “the people want the fall of the regime,” referencing the 2011 Arab uprisings across the region.

Al-Bashir, who has been president for 23 years following a 1989 military coup, announced severe austerity measures after Sudan lost over 75 percent of its oil revenue following the secession and independence of South Sudan.

Police surrounded the Imam Abdel Rahman mosque in the Khartoum suburb of Omdurman, a centre of support for the opposition Umma Party, and fired teargas at scores of protesters, Reuters reported.

The protesters responded by hurling stones back at the security forces and many of them were arrested.

The protests spread beyond the capital, however.

In the North Kordofan province in western Sudan, about 200 protesters chanted against increases in prices and inflation while police used teargas on demonstrators in another protest that took place in Madani, capital of the Al-Jazira province near Khartoum.

The eastern city of Kassala also saw protesting, according to eye witnesses.

The name “Elbow Licking Friday” was used in response to statements made by the ruling National Congress Party’s vice chairman, Nafie Ali Nafie ,who said protesters would have better luck licking their elbows than ousting the regime.

Al-Bashir has dismissed the protests as the work of a “few agitators” and vowed to go on with his proposed spending cuts and subsidy cancelations.

United Nations High Commissioner for Human Rights Navi Pillay said on Thursday there were reports of dozens of arrests of journalists, human rights activists and students as well as members of opposition parties and
movements.

One opposition movement, Girifna, which means Enough is Enough, has drawn up a list of 16 demands among which are the resignation of NCP government and its replacement with a transitional one that conducts democratic elections in the next two years.

The group also called for the cancelation of all public order laws and laws that limit freedoms.

Members of the group also demanded a reversal of all price increases and the release of political prisoners.

They are also asking for the end of ethnic conflicts in Sudan and trials for corrupt officials.