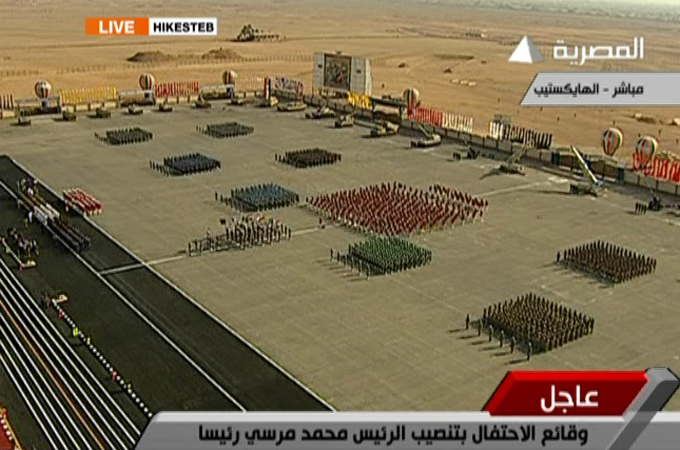 The Egyptian Armed Forces will not be immediately returning to their barracks following Saturday’s handover of power from the Supreme Council of the Armed Forces to President Mohamed Morsi, the president told a military audience yesterday.

In a large-scale celebration held by the military commemorating that Egypt finally has a civilian, elected president, Morsi delivered a speech in the Hikestep area of the Central Military Zone.

“The day has come where Egypt’s military finally, and willingly, hands over power to officials elected by the people,” Morsi told hundreds of military soldiers, officers and members of the Supreme Council of Armed Forces.

He referenced the fact that both SCAF Chairman General Commander Field Marshal Hussein Tantawi and his deputy, Chief of Staff Lieutenant General Sami Anan gave him military salutes, which he said symbolised their admittance to being subservient to the people, since military salutes are only given to superiors and Morsi represents the people as president.

“The military salute to me is a salute to the people of Egypt,” he said.

The president thanked the military and SCAF for their management of Egypt’s transitional period following the ouster of former President Hosni Mubarak. “I testify today that you all love Egypt and that none of your rights will be taken away,” he said.

Morsi’s positive address to military commanders is bound to leave many activists and revolutionaries feeling betrayed.

The military has been involved in the killing, arrest and torture of protesters and dissidents over the past 18 months. Yet, Morsi made no mention of legal actions or punishment and in fact stressed that he would be rewarding the military and its leadership.

“Ask for anything you want,” he told the audience. “In the future, I will be the one holding a celebration in your honour,” he added.

Morsi’s speech was preceded by a documentary showing the “accomplishments of the Armed Forces” and their “protection of the January 25 revolution” as well as a speech by Tantawi where he handed Morsi the Armed Forces Shield, a high military honour.

Tantawi began his speech by thanking Morsi for the “kind words” he had for the Armed Forces in a speech he had given earlier in the day at Cairo University.

He went on to affirm that SCAF always knew it was no substitute for the legitimacy of elected officials and that the men of the military had fulfilled all their promises.

“The Armed Forces stood by the people and took over the country in the worst conditions possible. But we fulfilled our promises and are now handing over power to the elected president,” he said.

Tantawi then said he would like to salute the lives of martyrs from the military, the police, and the “January 25 youth”.

The kind words exchanged by Tantawi and Morsi reflect that both sides may have reached an agreement to cooperate.

There had been a rift between the military and Morsi after SCAF released a constitutional decree severely limiting presidential powers, especially on defence.

Despite the military salute given to Morsi today, he remains legally not the head of Egypt’s military.

The decree names the Minister of Defence and SCAF Chairman, Tantawi, as General Commander of the Armed Forces as do all Egypt’s previous constitutions.

It does not, however, specify that the president is the Supreme Commander of the Armed Forces, a post all of Egypt’s previous presidents held. It makes no mention of the title altogether and leaves all military powers in the hand of SCAF, the membership of which the president cannot alter.

Morsi will need SCAF’s permission if he were to declare war or ask the military to oversee internal security like he did today.