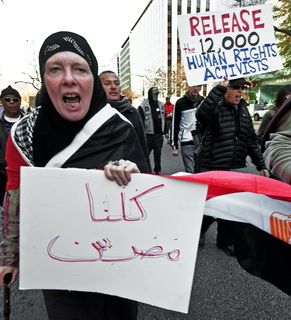 “What is it to you anyway? You are far away, expressing opinions from the comfort of your distance while we suffer the consequences!” A sentence I have heard many times, just because I’m living abroad. But I do care, very much. Because my family, my friends, my home, my life… are all still in Egypt. Those who say it know that, yet they still say it. And it hurts every time.

My husband and I moved to Montreal in 2010 for a job assignment at his company’s branch here. We took it as an opportunity to learn new things, acquire new experiences, and bring that knowledge back to Egypt when we return. We were always planning on returning. We still are.

We were in Cairo for the Christmas holidays in 2011 – my husband went back to Montreal to resume work while I decided to stay a little longer with my family. I was due to leave Cairo at dawn on Saturday, 29 January.

Then 25 January happened – followed by the events of Friday 28 January; the day-long, extremely violent crackdown, the police disappearing from the streets, the curfew being imposed. My bag was packed, my ticket ready, but it just didn’t feel right. I decided I wasn’t going to leave. I couldn’t. I lived through it all; the anxiety, the confusion, the outrage, the anger, the pure elation of Tahrir – all of it.

After 11 February, my life changed. As much as I had been using Twitter and Facebook pre-revolution, now they have become an integral part of my day. As soon as I open my eyes in the morning I reach for my smartphone. I rescheduled my day around talk shows and watching the news. I was never interested in politics, but that changed very quickly.

Being away feels like living in a parallel universe. My heart and mind are in Egypt, my body in Canada. As time goes on, I feel that most people I know back home are not keeping up with the current events as much as they used to, as much as I still am. Their fervour is somewhat dampened, and I am sure it would be the same for me if I had to deal with constant pressure of daily life in Egypt.

We cannot disconnect however, we keep checking our phones no matter where we are or what we are doing. It is bad enough that we are not there – the least we can do is know every single detail of everything that happens in Egypt.

We have gone to protests in front of the consulate in -15 degrees, we stayed glued to the TV during all the violent events that took place in Maspiro, Mohamed Mahmoud, Abbaseyya, and all the rest. We were up at dawn tohear Mubarak’s verdict.

Before the first round of the presidential elections we had the same heated conversations and debates within our small Egyptian community. We did our homework, read candidates’ histories, watched their appearances on talk shows, and stood in, very short, lines to vote.

Come the second round, I personally could not bring myself to vote. I felt that I was faced with a choice I could only reject as a whole; neither candidate represents me or my beliefs.

After the results were announced many attacked those who boycotted or invalidated, especially expats like me. “You have only yourself to blame for this catastrophe, you should return immediately and suffer the consequences of your irresponsible choice.” Or, “You shouldn’t have been allowed to vote in the first place. Why should you be given the opportunity to choose when you do not even live here,” are but a few of the bitter reprimands I heard for days after the results were announced.

I am disappointed to hear smart people say that just because we do not share the same point of view. But then again, as Egyptians, we are not used to having an opinion, voicing it, discussing it, hearing criticism, or accepting a different perspective.