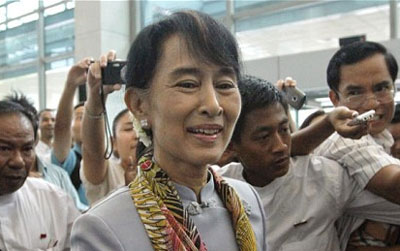 AFP – PARIS, June 28, 2012- Myanmar democracy champion Aung San Suu Kyi said Thursday that she is prepared to lead her country one day, speaking with AFP in Paris at the end of a triumphant Europe tour.

The Nobel Peace Prize laureate, in Europe for the first time in a quarter-century after enduring many years of house arrest, also spoke of her joy at the warm reception she received on her five-nation tour.

Asked whether she would be ready to lead the country also known as Burma one day, she said: “I think all party leaders have to prepare themselves for the possibility, if they truly believe in the democratic process.

“But it’s not something that I think of all the time. In fact, I think one has to concentrate on present work, of course preparing for the future. The present has to be linked to one’s hopes for the future.”

Suu Kyi, 67, flies back on Friday to Myanmar, ending the tour during which she was cheered by large crowds of admirers and toasted by leaders in Switzerland, Norway, Ireland, Britain and France.

“So many people from different parts of the world seem to be aware of what we have been struggling for in Burma,” she said. “I felt such a tremendous sense of solidarity with us. That has been a surprise.”

Suu Kyi on Thursday had breakfast with French former president Nicolas Sarkozy and his wife Carla Bruni-Sarkozy, visited parliament and then held a debate with students at the Sorbonne university in Paris.

She admitted her two-week journey was strenuous and quipped: “It’s very exhausting, and when people ask me about all the sacrifices that I’ve made, I’m always tempted to say the greatest sacrifice I have made is sleep.”

Myanmar, once under iron-fisted military rule but now run by a quasi-civilian government, faces legislative elections in 2015, which Suu Kyi’s National League for Democracy is set to contest.

But Suu Kyi stressed that the hard work needs to be done now.

“I think we can’t wait until 2015 to see how things will emerge,” she told AFP.”It is now that is most important… the next three years will decide what shape 2015 will take.”

As Western nations have eased or suspended sanctions, a business bonanza is under way in the resource-rich but impoverished nation.

Suu Kyi, the Oxford-educated daughter of the country’s independence hero, stressed that “whether it’s investment from China or the West, there should be codes of best practices to ensure that the investments are as beneficial for our people as profitable for the investors.

“We are very keen on businesses signing up to codes of good practices, especially with regards to financial transparency in the extractive industries, which tend to be the most controversial of all.”

More than 80 people have died in clashes between Buddhist Rakhine and Muslim Rohingya this month, the government said.

Suu Kyi said the key would be to strengthen the rule of law and citizenship laws, to ascertain which Rohingya are legal citizens and which are not.

“Some of them, I’m sure, are in accordance with the citizenship laws, entitled to the rights of citizens, but who these are we have to be able to find out,” she said.

“Communal strife, lack of communal harmony, is usually rooted in cultural and religious differences which take time to sort out. But with rule of law, immediate problems could be minimised.

“The problem in the west is… that the border is very porous. And the immigration authorities are not always the least corrupt,” she said.

“Another problem is the matter of citizenship. We need fair and strong citizenship laws which will stand up to international scrutiny.”

On a lighter note, Suu Kyi — wearing her trademark flowers in her hair — had a complaint about the continent she has just toured.

“I have been given many, many flowers. Everywhere I go people give me flowers,” she said.

“But there is one problem which I must let our friends in Europe know: the stems of European roses are very thick, and that makes it difficult for me to keep them in my hair. And I would appreciate if they would go in for smaller, daintier varieties.”