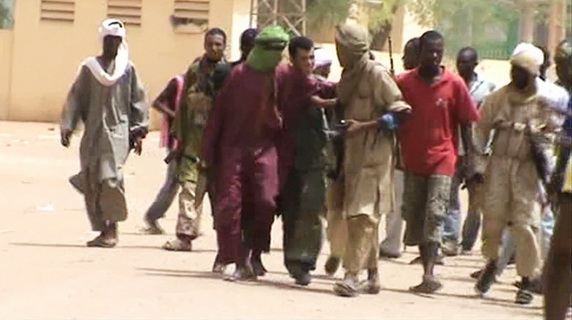 AFP- SAINT PETERSBURG, June 30, 2012- The UN cultural body UNESCO watched in horror on Saturday as Mali extremists ravaged shrines in the fabled city of Timbuktu which it had listed as endangered sites just days before.

The main watchdog for protecting some of history’s greatest treasures interrupted its annual meeting being held in Russia’s cultural capital to draw global attention to news filtering in from the ancient African caravan town.

There gunmen from a militant group with ties to Al-Qaeda had attacked tombs and vowed to destroy every last shrine standing in an act similar to the 2001 destruction of ancient Buddhist relics in Afghanistan by the Taliban.

“This is tragic news for us all and even more so for the inhabitants of Timbuktu who have cherished and preserved this monument over more than seven centuries,” UNESCO session chairwoman Yeleonor Mitrofanova told the gathering.

“I appeal to all those engaged in the conflict in Timbuktu to exercise their responsibility — for the sake of future generations, spare the legacy of their past,” she pleaded.

The Paris-based agency’s general director Irina Bokova said she could confirmed that Islamist militants from the Ansar Dine group had already destroyed three sacred tombs in a town also known as the “City of 333 Saints”.

“There is no justification for such wanton destruction,” Bokova said in a statement.

The rampage added a bitterly painful new cultural dimension to Mali’s uprising that started with an army coup in March and has since unravelled into conflict between rival groups of gunmen as well as the state.

“Ansar Dine will today destroy every mausoleum in the city. All of them, without exception,” the militants’ spokesman Sanda Ould Boumama told AFP through an interpreter from the city.

“God is unique,” he added. “All of this is haram (or forbidden in Islam). We are all Muslims. UNESCO is what?”

The raid came as a particularly brutal blow to UNESCO because the heritage committee had only on Thursday placed both Timbuktu and the nearby Tomb of Askia on its List of World Heritage in Danger.

UNESCO said the decision aimed “to raise cooperation and support for the sites threatened by the armed conflict in the region”, and expressed concerns that ancient artifacts could be smuggled out of the country abroad.

The UN agency appeared shocked that gunman had decided to simply erase all trace of the treasures instead.

“I call on all the members of the (UNESCO) committee, who represent the international community, to join me in expressing sadness and concern for the survival of this important World Heritage property,” Mitrofanova told the session while reading from an official UNESCO statement.

The destruction in Mali is reminiscent of the Taliban blowing up the giant Buddhas of the Bamiyan valley in Afghanistan — an ancient Buddhist shrine on the Silk Road and a world heritage site — in March 2001 after branding them un-Islamic.

Mali has been gripped by deadly chaos since a March 22 coup effectively incapacitated the government’s army.

Tuareg rebels who oppose the state and represent descendants of a group that is believed to have founded Timbuktu at the end of the fifth century spearheaded the initial armed takeover of the north of the country.

They were soon joined by the Ansar Dine rebels with formal ties to Al-Qaeda who have since taken the upper hand.

Tensions have been running high between the two groups because of their differing objectives.

Deadly clashes in the resulting fight for supremacy have made Gao — home to the Tomb of Askia — and Timbuktu into focal points of unrest.