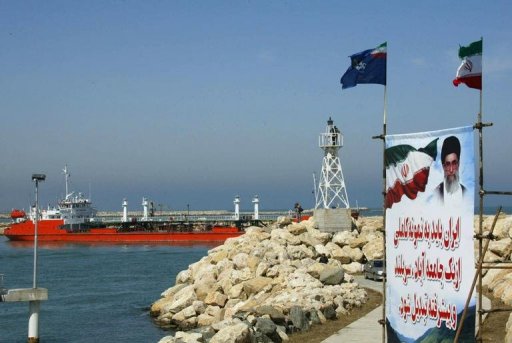 (AFP) – A European Union embargo on Iranian oil went into effect on Sunday, provoking anger in Tehran which says the measure will hurt talks with world powers over its sensitive nuclear activities.

Oil Minister Rostam Qasemi sought to downplay the embargo as just the latest punishment in decades of ineffective sanctions.

Iranian leaders have insisted they will forge ahead with their atomic programme, regardless of the Western restrictions and others imposed by the UN Security Council.

Oil market observer bodies and analysts say the embargo, coupled with US financial sanctions ramped up on Thursday, are gutting Iran’s vital oil exports, which account for half of government revenues.

The International Energy Agency (IEA) says Iran crude exports in May appear to have slipped to 1.5 million barrels per day (mbpd) as the market braced for the embargo, which has been phased in since being announced January 23. That is far less than the 2.1-2.2 mbpd Iran insists it continues to sell abroad. “The sanctions have had no effect on Iran and will have none,” Qasemi was quoted as saying on Sunday by the ISNA news agency. “I do not see a problem in our enemies starting the sanctions as of today (Sunday), since these sanctions have existed for many years and nothing has happened and one should not anticipate anything new,” he was also quoted as saying on the website of state broadcaster IRIB.

Qasemi and other officials admitted the “illogical” embargo had reduced exports to EU nations, but they said other nations had stepped forward to buy the oil. “While we collectively exported 18 percent of our oil to them before, it is not difficult to substitute customers for this much oil in the world,” Qasemi said.

It was not possible to verify that claim because Iran has turned off the mandatory location transponders on most of its fleet of 39 oil tankers. The IEA and experts say most of the tankers remain anchored off Iran and are being used to store up to 42 million barrels of oil unable to be exported.

Before the embargo, Europe bought some 600,000 bpd from Iran, which sent two-thirds of its exports to China, India, Japan and South Korea. The United States has granted exemptions to those Asian countries from its new sanction imposed on Thursday that targets foreign companies doing business with Iran. That move averted a potential diplomatic row with China, Iran’s biggest oil customer, which greatly increased Iran crude purchases last month after a sharp dip earlier this year because of a commercial dispute with Iran. Beijing refuses to go along with the Western sanctions.