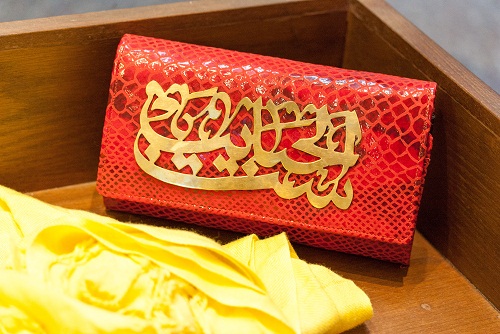 Fashion is about more than just looking good, traditionally it is a creative tool to express the identity and values of a society in an aesthetically pleasant, and sometimes challenging, way.

The rich history of the Egyptian culture has proven to be a popular inspiration for young designers like Rabab Salem. Her designs are based on her love for silver and Egyptian proverbs and encompass a full line of accessories.

Salem, born and raised in London, has always been fond of the flowing twists and turns of the Arabic alphabet and this has been the base of her designs for her line of accessories.

At first she produced single pieces for friends and family in both Cairo and London and their enthusiastic feedback prompted her to open a small Facebook-based outlet in 2009. Salem moved to Cairo to be closer to the culture of her heritage and interest in her designs kept growing, leading to the opening of Ruby’s Silver showroom in Heliopolis in 2011. Salem named her brand after her childhood nickname and her favorite metal: Ruby’s Silver.

Her showroom is filled with several of her collections and most pieces feature the stylized Arabic words and phrases Salem has become known for. The meaning of the flowing calligraphy in precious metal varies, from tongue-in-cheek Arabic and Egyptian folklore sayings and proverbs to Quranic verses.

The aptly named ‘Eye’ collection is centered on the traditional blue eye stone, which is believed in some eastern cultures to deflect negative energy specifically and evil in general. Salem combines the striking blue stones with pearls in necklaces or as the single adornments on rings.

Ruby Silver’s latest collection, Kunooz, [treasure], includes pieces that conjure up images of jewelry chests lost at sea and recently washed on shore. “The stones set in silver, give the pieces a washed-up treasure feel,” Salem confirms. The combination of turquoise and silver has been used by many designers before, yet Salem’s designs are fresh and inviting.

Except for the occasional use of precious stones, most accessories are made out of pure silver. “Silver is not as costly as gold, but to me it is just as precious,” Salem told The Daily News Egypt. “I have always loved the colour – it does not change neither does it requires something extra. Silver has a great flexibility which allows me a lot of freedom in the designs.”

Besides jewelry, Ruby’s Silver also sports a line of leather wallets and purses, adorned with silver or copper designs. A nice example on how Salem does not take herself to seriously is the popular Egyptian proverb ‘He who owns money, is more likely to jinx it’ that is prominently displayed, in beautiful calligraphy, on one of the wallets.

The shop’s catalogue includes items for men, like cufflinks and key chains, all sporting her signature calligraphy designs. Salem offers customers the option to personalise any of Ruby Silver’s designs to their liking, whether it is to add a name of replace a saying.

When asked for advice for young artist that are planning to open their own business, Salem says “don’t expect fast returns and profits.A business like mine runs on creativity and depends on continuously having new ideas. The most important thing is to be passionate about what you do.”

Salem’s passion for her work is paramount in her designs and is the main reason Ruby’s Silver has become the success it is today.