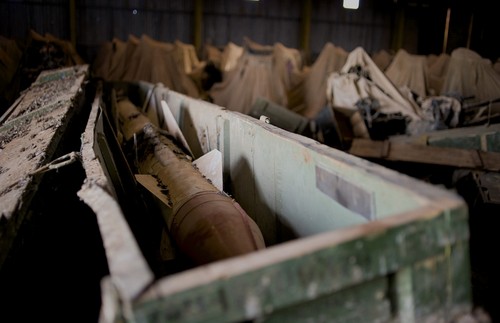 Im his fit In his first speech as president of Egypt, Mohamed Morsi addressed a nation left divided by a polarising election.

As the President was taking his oath of office, the Daily News Egypt and other organizations were reporting that significant weapons caches, including nearly 140 Grad rockets and 140 Grad warheads were intercepted by Egyptian State Security, bound, allegedly for Gaza. If the reports are true, the capture would be the largest seizure of weapons by the Ministry of Interior.

According to the same reports, the weapons were made in Libya, smuggled into Sinai and were headed “towards Palestine.” On Sunday morning, another four rockets were reported to have been seized, again bound for Gaza, but discovered in Sinai. The Commander of Northern Sinai Security Services Ahmad Bakr told Egyptian media police arrived on the scene and collected remnants of the explosives. The officers are attempting to determine the weapons origins, he said.

The northern Sinai was placed under a security alert last month due to the Egyptian elections, and authorities deployed forces and “counter terrorism” units in the border region with co-ordination with Israel, officials said at the time.

Ahmed abou Thila’, a North Sinai activist and journalist, told the Daily News Egypt on Sunday, “the security situation is difficult, last night rockets were fired by people most likely testing weapons they had smuggled from Libya.” Thila’ suspects “all of the weapons that are coming from Libya are headed to Gaza.” According to Thila’, Bedouin tribes have been amassing weapons from Libya following the uprising that toppled Muamar Gaddafi. He said he knows people who were arrested during the last week on weapons charges.

The day after President Morsi was elected in office, the Israeli Defence Force began assembling a Russian made radar system along the Sinai border to detect incoming rockets. This followed an attack on June 16 at the border which left, according to reports, three militants dead on the Sinai side.

President Morsi is in a position to have to take a stand on the enforcement of the blockade on Gaza. With what appears to be an escalation in Sinai, the president may have found the cover he needs to close the Rafah crossing without losing face among an Egyptian population eager to renegotiate the restrictions on the region. According to Thila’, “not really. The tunnels are working anyway. If they want to stop weapons smuggling they should stop the tunnels, the Rafah crossing is for civilians.” “Israel is really worried about the weapons coming into Gaza,” he said.