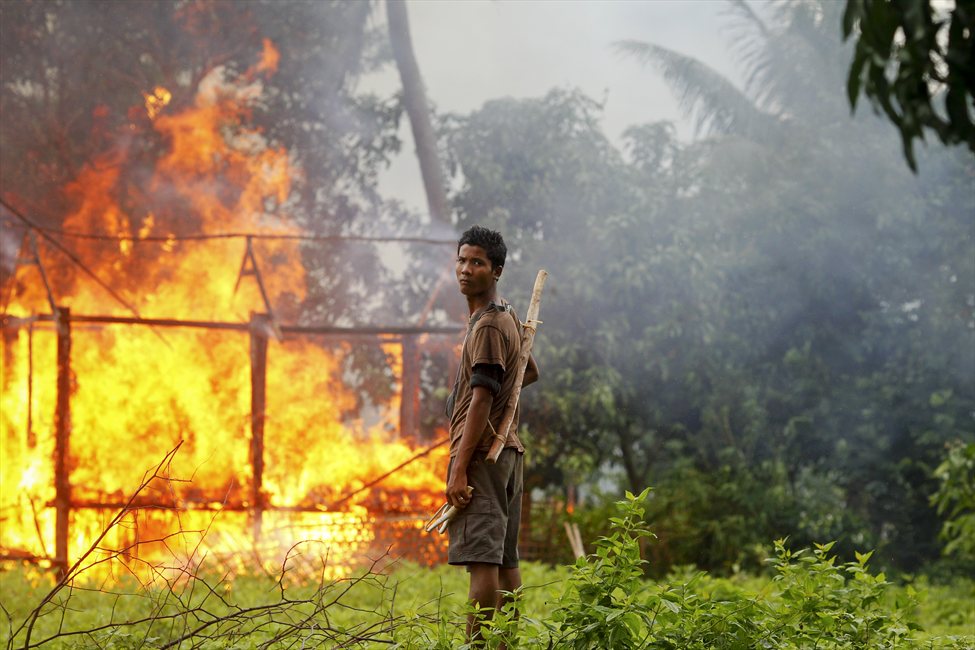 When asked where his parents were, the boy mustered, “I don’t know.”

He was still very young, even at 17 years-old, to have made a perilous crossing at the Naf River alone, venturing from Myanmar to Bangladesh and fleeing the threat of the Burmese military the length of the trip.

At a refugee camp outside of the Bangladeshi city of Teknaf, the boy recounted his story to a documentary photographer, illustrating the plight of the Rohingyan people and their fight to survive under the thumb of the military rulers of Mynamar.

It is a fight and story that has been largely underreported, and it is a story that impelled Saiful Huq, the Bangladeshi photographer who spoke to the boy, to document what has been called a “slow-burning genocide” by observers like Tun Khin, President of the UK-based Burmese Rohingya Organization (BROUK).

Huq has been gathering the stories for four years now, capturing tales of escape and violence through his camera’s lens.

The Rohingya tale has similarly touched Cairo, as Egyptians gathered on Friday at the Myanmar embassy to pressure its government to cease all hostilities against the unarmed civilians. The Rangoon government claims the rural communities hide a dangerous insurgency and pose a grave threat to the nation’s security. The embassy in Cairo declined to comment about the pressure on the government.

The young boy arrived only last Saturday after hiding from an hour-long gunfight. The Burmese military attacked his village, the boy said, and fired on him and his friends. He was forced to watch six of his friends die before he fled, crossing the river and finding himself in Bangladesh like tens of thousands other Rohingya people.

He was lucky, however, as many people are simply turned away.

In early June, the Burmese military fired on a boat carrying refugees who were returning to Myanmar, killing nearly 50 people.

“Even if Bangladesh could take all the arrivals, it doesn’t solve the problem which lies with Myanmar having made these people stateless essentially,” Huq told the Daily News Egypt only an hour after having returned from near one of the camps. As a member of the press he was denied access to the camp as the pressure against the foreign reporting on the situation being too high and too dangerous. “The government does not want this story being told,” he said.

Bangladesh is not a signatory of the 1951 Convention Relating to the Status of Refugees or its Protocol, Huq says they should still act much more responsibly, “Bangladesh should realize that what began as sectarian violence has evolved into organized and large scale state sponsored violence against the Rohingya. And as a neighboring country, knowing these, we cannot push back the Rohingyas into the burning hell- called Burma” says Huq.

Fighting in Mynamar’s Kachin and Rakhine provinces has reignited the threat facing the Rohingya after a nearly two- decade ceasefire between Myanmar’s armed forces and Rohingyan insurgents.

The fallout has displaced at least 70,000 people and as many as 90,000 according to reports from human rights agencies.

Huq came across the situation facing the Rahingyan people while on assignment. He was moved by the depth of the crisis, with it being a long-standing conflict that has so far been critically underreported. For the last four years, he has devoted his attention to gathering the stories he has sadly been forced to hear.

The government of Myanmar does not recognize Rohingya Muslims as citizens, despite their claims to the land in Myanmar’s Rakhine province that dates hundreds of years. They have been accused of being ethnically tied to neighbouring Bangladesh and are diminutively called “Kalar,” a slur against their darker skin. However, Bangladesh does not recognize them, largely crowding them into camps like the one at Shahburi Bib, where the Rohingya are largely left stateless.

UN Special Rapporteur on Human Rights in Myanmar, Tomás Ojea Quintana, has stressed the need for the authorities to take steps to address the “long-standing issues of deprivation of citizenship, freedom of movement, and other fundamental rights” that plague the welfare of the Rohingya people.