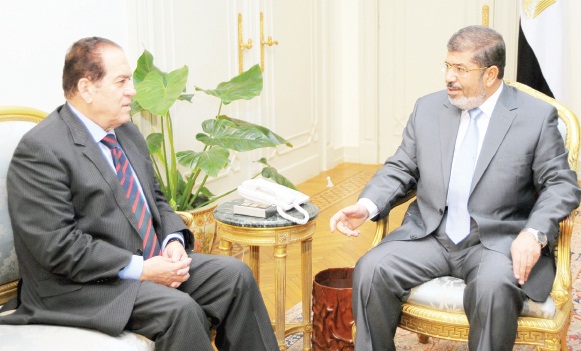 President Mohamed Morsi met on Sunday with Kamal Al-Ganzouri’s caretaker cabinet. The meeting involved a briefing by the cabinet on the economic and security situations in Egypt.

Morsi took several decisions during the course of the day on Sunday: he ordered the formation of a committee made up of members of the military judiciary, the Prosecutor General’, and the Ministry of Interior to review the cases of all those sent to prison as a result of military trials and release those found undeserving of a sentence.

He also issued a 15 percent raise to all public sector employees, and increased the minimum social security pension from EGP 200 to 300 to the benefit of more than a million and a half citizens.

The president is yet to choose a prime minister or a cabinet to form the new government. Former Prime Minister Kamal Al-Ganzouri submitted his resignation to the Supreme Council of Armed Forces after Morsi’s election. SCAF Chairman Field Marshal Hussein Tantawi asked Al-Ganzouri and his cabinet to carry on their duties in a caretaker capacity until Morsi appointed his own prime minister and cabinet.

In the run-up to the announcement of his victory, Morsi promised to name an independent prime minister who is neither a member of the Muslim Brotherhood nor its political wing,the Freedom and Justice Party, which Morsi formerly chaired.

Many figures have been touted as replacements, the most notable of which is former International Atomic Energy Agency and Nobel Laureate Mohamed El-Baradei. Sources close to El-Baradei have denied that he was offered the position, however, and some expressed that it was unlikely he would accept it if offered. “I talked to him about four days ago and he said nothing about being offered a cabinet post,” said Abdel Rahman Yousef, the former coordinator of El-Baradei’s presidential campaign. He added that El-Baradei was unlikely to accept the position of prime minister unless it came with actual power as he would not agree to be a figurehead. “The biggest issue would be what powers the prime minister would have, since the president himself does not have his full authority,” Yousef said in reference to the supplementary constitutional decree limiting the president’s power that SCAF released just before Morsi won.

Several prominent political figures have also denied the president has approached them in regards to positions in his cabinet. Constitutional expert Hossam Eissa and economic expert and former Deputy Prime Minister and Finance Minister Hazem El-Biblawy have both denied being offered the prime minister post. Both cite the lack of power as being a condition necessary for them to carry out duties as members of President Morsi’s cabinet.

El-Biblawy said he would take up the position if he were allowed to pick his own ministers while Eissa said he only saw himself in the opposition. The same dilemma exists with the post of Vice President, with Morsi yet to appoint one as well. He had previously said he would appoint three, two of which to be a Coptic Christian and a woman.

Former presidential candidate Abdel Moniem Aboul Fotouh has also announced he received no call regarding the vice presidential post but said he would consider it if the position came with actual authority.