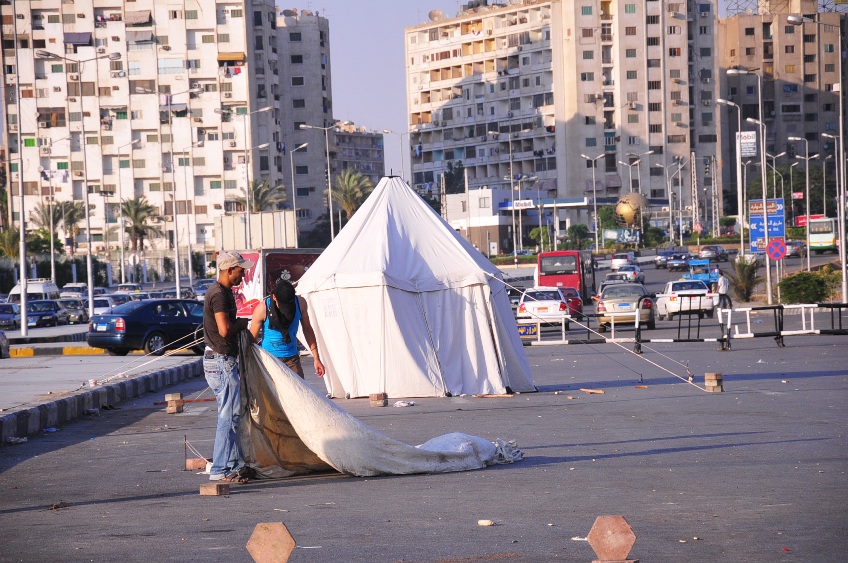 The protest camp at the Tomb of the Unknown Soldier in Nasr City couldn’t be more different from the crowd still gathered in Tahrir Square. While thousands inhabit one, tens inhabit the other.

While one group calls for increased presidential powers, the other calls for a limit. Yet, they both seem to agree on one thing, the Supreme Council of Armed Forces is the problem, not a part of the solution.

In one corner are a group sarcastically called ‘honourable Egyptians’ a mix of former regime supporters and those fearful of the Islamisation of the identity of Egypt’s politics as identified by right wing pundit Tawfiq Okasha.

In the other corner are strange bedfellows made up of the Muslim Brotherhood, labour, civil rights and independent activists.

The military platform where former Egyptian President Anwar El Sadat was assassinated has become a centre of attention for a ‘new’ opposition in Egypt, or perhaps the old vanguard of the Hosni Mubarak regime turned new underdog following his ousting. “We want a president with limited powers,” said Tarek Kadry, an Open University student studying commerce who has been engaged in the sit-in at the Sadat parade ground for the past three days on Nasr Road. “We have three major demands; the first is that we support the supplementary constitutional declaration. We do not want the return of the dissolved parliament because the decision to dissolve it came from the court and we don’t want someone from the Muslim Brotherhood (MB) or Freedom and Justice Party (FJP) to hold a position in sovereign ministries.”

Kadry insists he would be making the same demands if it were Shafiq who had been named president. “We do not support either Morsi or Shafiq,” he said. “We don’t want to damage our country. We only want the best for the country.”

Bassant, who only gave her first name, is a computer engineer who was also participating at the sit-in. Bassant was there for the same reasons as Kadry, she fears a “terrorist” state. “They are terrorists and killers” she said, referring to Mohamed Morsi’s Muslim Brotherhood backers.

Bassant strongly believes Morsi forged his way to the presidency and that through US pressures on the Supreme Council of Armed Forces, he was awarded the position. She has joined the sit-in because she opposes Morsi and she wants to, “defend SCAF from the Brotherhood.”

Kadry and Bassant are a slice of what formerly make up the support base for SCAF. However, since the results of the presidential elections, many have turned on the generals accusing them of having forfeited the best interests of the state for their own political survival.