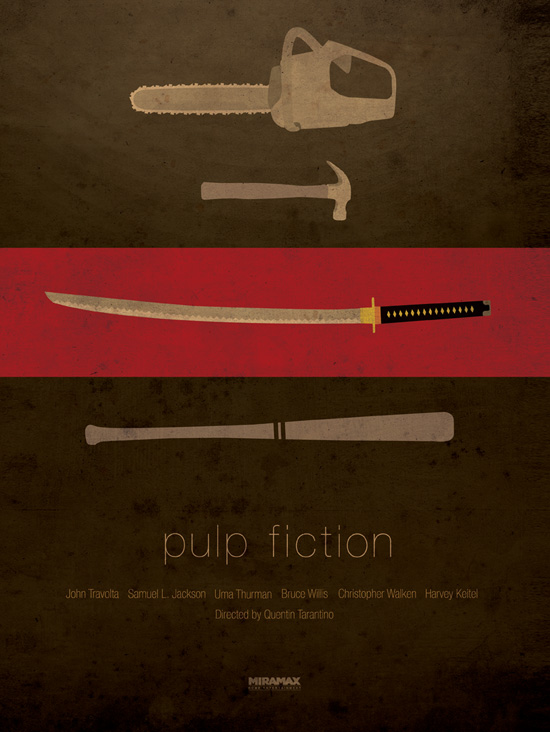 Canadian born Ibraheem Youssef makes posters as an art form. His minimalist designs clearly show the careful thoughts behind the concepts, enhanced by the impact of deceptive simplicity. Youssef’s posters garnered a large following worldwide from the moment they appeared on the internet.

Youssef, a self-proclaimed movie buff, has a profound distaste for the movie posters deployed by large studios to attract attention to their new releases. “As a designer and illustrator it frustrated me that the studios spend so much money producing a movie, yet always go for the cheap shot when it comes to advertising. There is no artistic vision in movie posters, it is sad that instead of trying to spark our curiosity they just photoshop the actors faces together and leave it at that,” commented Youssef.

In 2009, this dissatisfaction grew into the urge to design a poster that would do justice to the movie it advertised. According to Youssef, late one night he added a new design to his Flickr page and his website. It was just a personal project that he had done for his own amusement. When he woke up the next morning, the world was knocking at his door, virtually.

“I wanted to open my website to see if my friends had left any comments, only to find out it had crashed due to the amount of traffic it was getting. It was strange, people were sending me emails and asking me where they could buy the poster. I never expected anything like this, but it was a nice surprise,” Youssef says.

The positive feedback inspired Youssef to design a series of posters and with each one his reputation grew. “I love Tarantino’s work, and I designed a series of posters for his movies, including one for Inglorious Bastards. One day I received an email from Steven Abraham, the marketing director for Universal/NBC. For a moment I was worried,” laughs Youssef, “I was wondering if he was upset with me using his studio’s movie, or sue me for copyright issues or something.”

Youssef could not have been further from the truth because Abraham had contacted him to let him know he was familiar with his work and loved it. With the movie being nominated for that year’s Academy Awards, the studio wanted to use Youssef’s design in the promotion for the movie. “Of course I said yes,” Youssef shares, “it was an honour to be asked. And as a thank you they sent me a copy of their version of the poster, signed by Tarantino.”

Youssef produced a collection of posters and has been selling the prints through the internet. What started, and still is, a labour of love has actually provided him with recognition and a nice supplement to his income. “I have participated in exhibitions in several places in the world, from the US to The Netherlands. It has been an amazing experience. I get asked sometimes why I am not producing more of them, since they are so popular. I am trying to avoid being known only for this part of my work, so I am producing fewer posters than before. I want them to be special, and it takes me a long time to make,” Youssef explains.

When asked about his artistic process, Youssef said “60% of the work is done in my head, I think about a design for a very long time. The next 20% involves me, a pencil and a piece of paper. I like the simplicity of drawing and make all my designs that way. The final 20% is when I digitalise the design and finish it in the way I worked out during the time that went before.”

Youssef holds the Canadian and Egyptian nationality and lived in both countries as he was growing up. “I spent a lot of my teenage years in Egypt and feel very connected to the country. Even if I am living in the US at the moment, I keep in close touch with my family and friends in Egypt and visited as much as I can.”

Commenting on the explosion of artistic expression in the wake of the January 2011 events, Youssef says: “I am still digesting what happened during the days of the revolution. I was in Egypt visiting friends and experienced it all. I feel that the impact of those events on me is still sinking in. As I said, I like to think about my art a lot before I start to work and I don’t feel ready to express myself yet about the revolution,” he said before concluding “it will come though.”