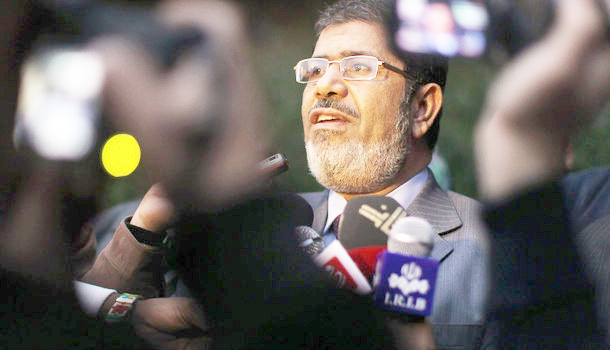 The Freedom and Justice Party, the Muslim Brotherhood’s political wing and President Mohamed Morsi’s party, has denied it sent the president a memo with recommendations regarding his next cabinet.

“They are all lies, we have sent no memos to the presidency whatsoever,” Essam El-Erian, FJP Deputy and Acting Chairman said in an interview.

El-Erian’s statement comes at a time when all eyes are on Morsi and the FJP with regards to the formation of a new cabinet.

Morsi was sworn in on Saturday and is yet to appoint a vice president, prime minister or a cabinet, leaving the Al-Ganzouri cabinet to function in a caretaker capacity after its resignation.

He met with regional governors and police chiefs yesterday but not with any vice presidential or prime ministerial candidates.

Morsi asked the governors to remain in their positions and said he would not replace them before appointing a new cabinet, signalling that the process might take a long time.

The National Front to Continue the Revolution, a group of uneasy Morsi supporters made up of revolutionary figures and activists who decided to support him in order to prevent an Ahmed Shafiq victory, held a meeting on Sunday.

The front recommended that Morsi appoint Abdel Moniem Aboul Fotouh for vice president and Mohamed ElBaradei for prime minister but denied having a list of names for cabinet positions.

Aboul Fotouh, a former presidential candidate, denied being offered the position of vice president, but said he would not take it unless it came with real power and was not a token post.

Sources close to Nobel prize laureate and the front runner for the premiership Mohamed ElBaradei have made similar statements.

His former campaign coordinator Abel Rahman Yousef said that ElBaradei was yet to receive an offer but he would not take the post if he was not allowed to work independently and have authority over the cabinet, something Yousef said he doubted would happen.