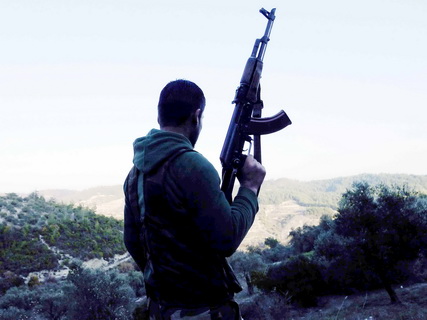 In the backdrop of an escalating Syrian uprising, Turkey scrambled six F-16 fighter jets to the Syrian border on Sunday when, they claim, Syrian helicopters encroached on the country’s border with Syria.

The military later sent two more F-16s to the Turkish Batman region, after reports of sightings of additional Syrian helicopters. by troops on lookout. Sunday’s events come after a rapid escalation of military posturing after the shooting of a Turkish jet by Syrian forces last week.

“We support Turkey as it seeks to hold the Syrian Regime accountable” said Jennifer Rasamimanana, regional spokesperson for the US State Department. “As a member of NATO, we stand in strong solidarity with our ally, Turkey, particularly with regard to any further incidents” she added.

Turkey called for an emergency NATO convention immediately following the incident and the organisation condemned Syria’s actions, declaring “full solidarity with Ankara.” “We will continue to stay in close touch with Turkey about its security concerns and stay solid as allies, as we always do,” Rasamimanana said. “We are not going to speculate on actions Turkey may decide to take with regard to its own defence.”

In an effort to solve the Syrian matter diplomatically, Arab League and UN envoy Kofi Annan called on the five permanent members of Security Council for a meeting on Saturday.

The meeting, which was also attended by representatives from the EU and Arab States, agreed on terms to form a transitional government in Syria which would be capable of overseeing a return to peace in the conflict-torn country. The agreement has been widely criticised for lacking any language delineating that the transitional government would neither include Bashar Al-Assad nor anyone of his aides.

While diplomacy stumbles on Annan warns that the crisis could spill over into neighbouring nations threatening to ignite a much larger and bloodier regional conflict.

His comments were followed on Monday with reports in the Lebanese Daily Star newspaper describing Syrian soldiers crossing the Syrian-Lebanese border and kidnapping two members of Lebanon’s General Security while firing on their offices.