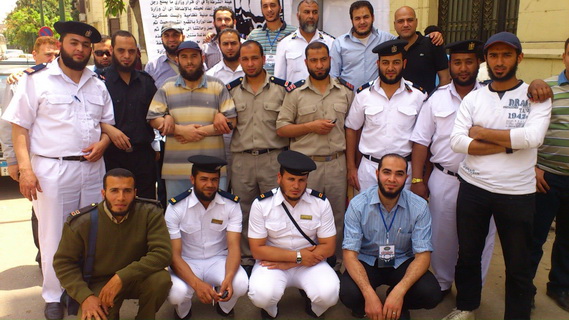 The offending officers have been relieved of their normal duties by the Minister of Interior General Mohamed Ibrahim for causing “damage to the general good” of society.

The General added that policemen’s beards could possibly cause sectarian tension and make Christian Egyptians feel insecure when dealing with the police.

One officer has asked for his case to be brought forward but this request was denied by the Cairo Administrative Court on Wednesday.

Twelve other policemen have filed cases which have been referred to a specialized court jurisdiction and nine police officers filed cases that are scheduled to be reviewed in mid-September.

It has been reported by various newspapers that while awaiting judgment the police officers have been either taken out of the field and assigned administrative duties or suspended entirely.

What is clear is that the officers are eager to have their cases processed as “accelerated rulings” so they can return to work on the force and be paid normally.

The officers alleged they have not been paid since the ministry’s ruling earlier this year.

Administrative duty is typically half pay, and if the officer is sent home, policemen receive no pay.

Lieutenant Ahmed Hamdy, the coordinator of the “I am a bearded police officer” movement, an organization which he describes as “a family,” said the Interior Ministry’s decision to place the officers on reserve duty is
“nonsense.” He said the officers, “are not being paid.”

“Our job as police officers is not to judge people,” he said. “My job is only to prove whether something happened or not.”

Two bearded police officers’ cases have received favourable rulings, one decided on Wednesday and the other reviewed this past May, in Alexandria.

In both cases, the court ruled in favour of returning the police officers to regular duty. But in the case of the officer in Alexandria, the Interior Ministry has insisted he has not be acquitted yet. Hamdy is hopeful still.

“I expect the same ruling for another police officer tomorrow Inshallah (God willing), but I don’t understand why we are being treated this way in Cairo.”

Hamdy said 66 police officers across the country are faced with similar cases.

The Interior Minister’s decision is based on Article 41 of the police law, which states police officers should do their job without violating national customs.

“Are beards against the general custom of Egypt?” Hamdy asked. “So, are priests and Sheikhs violating national customs?”