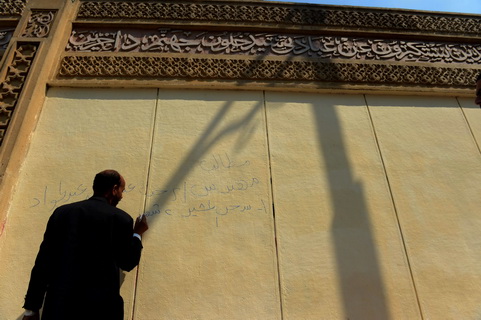 They are climbing the walls, sliding notes through the cracks and banging on doors trying to get a little time with the man inside.

They have come with demands for someone who represents the ‘everyman,’ only this everyman is President Mohamed Morsy.

After the over-throwing of the almost mythic Hosni Mubarak, whose security apparatus would have readily arrested those near, much less, outside of his presidential palace, President Morsy’s short tenure seems to herald a new era where both demands and the man himself can be met.

There is evidence that Morsy is quite fond of speaking with ‘everyman’ Egyptians.

Before delving into the meat of his inaugural speech, taking the oath of office for a second time, inside Cairo University, Morsy was quick to apologize to around 100 students standing outside protesting the cancelling of exams at the university in lieu of the event.

Morsy similarly bore his unprotected chest to crowds gathered in Tahrir Square in a show of commonality with the public.

If that’s not enough, the president reportedly met with a delegation from Cleopatra Ceramics representing their grievances on Monday.

They met with President and he promised to deliver a response within 48 hours and, according to a spokesperson for Cleopatra Ceramics, assured that the solution would be a legal one.

“They are members of a managerial committee; not a union committee like they claim.” The media centre told the Daily News Egypt, adding that their demands are both illegal and uneconomic.

“If their demands are met, it would lead to the closing down of the company altogether.”

The media centre also added that the workers have disrupted production for five times throughout the past 16 months, for a total of 3 months.

On Wednesday the protesters suspended their sit-in after their meeting with the president on Monday, only to cut-off the Ain Sokhna road after receiving the president’s response to their demands.

In a phone call from the presidential palace the protesters were told that their demands will be met, but they will be held financially responsible for the production disrupted since 20 June.

Protesters from Helwan Cement and Tora Cement companies closed down the roads to the presidential palace, in a bold escalation of the palace sit-in.

Some protesters went even as far as trying to gain access into the presidential palace, with a few even climbing the fences.

Workers at the Cleopatra Ceramics factories were the first to start the trend of staging protests at the Presidential Palace on Monday, demanding their delayed payments from the annual profits.

The group’s chairman, Mohamed AbulEnein, had earlier refused their demands, accusing them of disrupting production.

The workers earlier brokered a deal with leaders of the Third Army as well as the minister of manpower and immigration in regards to receiving profits, which had been delayed since 1997, according to Al-Badil newspaper.

They were soon joined by workers from several other organisations, including the Italian Pirelli company for tires.

The protesting workers, who had moved their sit-in Monday from infront of the Italian consulate in Alexandria to the presidential palace,demand the return of their fired co-workers as well as receiving the full payment of their annual profits, getting health insurance for their families and disbursement of delayed monthly salaries.

Wednesday saw even more new-comers, as workers from the Nile Company for textiles arrived to the presidential palace, demanding the president’s intervention to implement the working agreement, which the independent syndicate had brokered in April with the company’s chairman under the auspices of the minister of manpower and migration.

The agreement comprise of increasing the insurance payment, as well as the payment of social and periodic raises as issued by the government.

Not only were the demonstrators calling for workers’ rights, but a march entitled “Freedom march II” went straight to the presidential palace Monday, calling for releasing all detainees imprisoned on background of any events related to the January uprising.