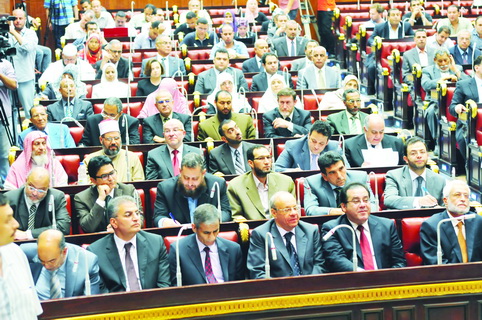 Egypt’s new constitution will be drafted and ready for public referendum by the end of August, members of the Constituent Assembly have said.

They are aiming to have the first draft completed within four weeks and to finalise it for a popular referendum by the end of August.

The Assembly seems set to use most of the articles from the 1971 constitution, making changes only to the sections concerning the system of governance, and the powers of the president and parliament.

The decision to speed-up the constitution writing process is likely to be the result of the assembly facing dissolution on September 4. Members have decided to finish the constitution before then so that even if the

Administrative Judiciary Court rules the body invalid, the constitution produced will have already been passed.

“Even if you found 100 constitutional experts, they could not agree on 150 articles in two months,” said Rafaat Fouda, professor of consitutional law at Cairo University.

Fouda believes that if this is really the case, a constitutional draft must have been readied in advance as there is simply not enough time alotted for drafting an original document.

There is a near consensus within the assembly to limit presidential powers, for example making the decision to dissolve parliament subject to a referendum.

The assembly also plans to expand parliamentary powers, by giving the parliament the power to remove cabinet members following a vote of no confidence.

It is yet to be determined whether President Mohamed Morsy will complete his four-year term, or if there will be new presidential elections after the new constitution is adopted.

Several members of the Constituent Assembly have suggested that the constitution include transitional clauses which stipulate that Morsy should complete his term, while others argue that it is normal to hold new elections after a new constitution is adopted, as presidential powers will inevitably be different.

Another point of dispute is Article Two of the old constitution, which stipulates that the “principles of Shari’a” are the main source of legislation for Egypt.

Liberal, secular, and Christian members of the assembly, as well as those coming from Al-Azhar, want to keep Article Two as it is, while conservative Salafist members want to take out the word “principles,” meaning Shari’a could be implemented in a more literal sense.
Fouda said 57 of the members of the body are Islamists, which is why he expects the consitution to “represent their interests in most of the articles.”

In a meeting of the Rights and Freedoms Committee of the Assembly, Adel Afify, chairman of the Salafist Authenticity Party, called for “limiting general rights” in the new constitution.

Afify argued that personal rights should be limited to what is permissible according to Shari’a law.

Issues around the Shura Council have also caused argument among Assembly members.

This upper house of parliament is seen as largely ineffective and many Constituent Assembly members call for giving it more power and having more members of it be elected.

Currently, a third of the council are appointed by the president. Others argue that the Shura Council should be scrapped altogether.

Finally, many are calling for the cancelation of the current farmers and workers quota in Parliament. Exactly half of the members of the current Parliament are required to be farmers or workers, but many believe that this quota is unfair.