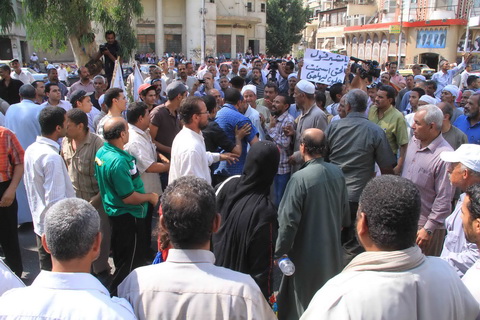 The victims of military injustice, families of civilians imprisoned or detained by military courts, and several revolutionary groups, addressed the president from the presidential palace on Wednesday.

Protesting against the committee formed by President Mohamed Morsy to review all the cases ofindividuals sentenced by military courts, the groups wereangered by the selection of committee members comprised of officials of the Ministry of Interior and military judiciary, who they sayoversaw the detentions of civilians.

Instead, they are demanding Morsy issue presidential pardons to those convicted in military trials and have them re-tried in civilian courts.

They are also demanding the immediate release of those detained with no charges.

Several people who have been detained or imprisoned by military trials, including a young man, a sheikh and a female doctor, took to the stage and described their ordeals involving arrest and detentions.

One man described how in the recent Abbassiya clashes, he was lured outside of the Noor mosque by military police officers who asked him and others to leave the mosque so they could “protect them better.”

It turned out to be a ruse and the military police were waiting outside to arrest them.

They also demanded that revolutionaries convicted by military trials be compensated for any harm they endured at the hands of military courts.

“I was arrested during the Abbassiya clashes on the Friday and taken to the Ministry of Defence into a room that I think was part of Military Investigations. For over two hours I was subjected to all kinds of torture and insults,” said one man.

“In my name and the names of all those who wish to release the revolution’s prisoners, I refuse all military trials for civilians,” he added, reading a statement.

“I also refuse the arrest of honourable officers in 8 April, 27 May and 20 November whose only crime was to join their people and the revolution, and who are being charged with disobeying orders. What orders are they talking about? Orders to attack their own people,” he went on.

“I also refuse the mistreatment of Egyptians abroad, like the Egyptian lawyer Ahmed El-Gizawy who is being illegally detained in Saudi Arabia.”