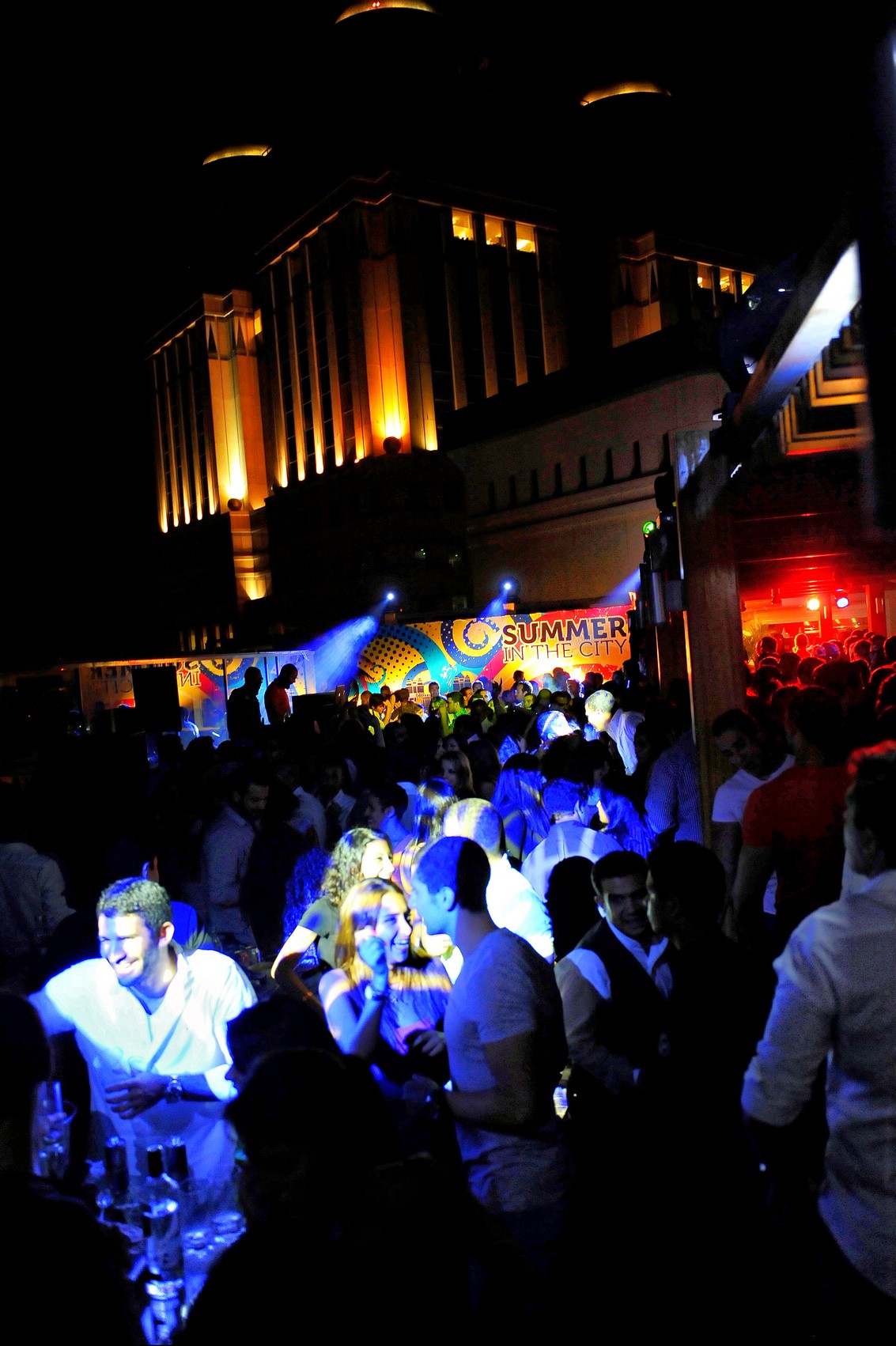 Event Republic is hosting a bi-weekly, concept party-night throughout the summer, to be followed by similar events in future seasons. Last Tuesday was the fifteenth party in this series of seasonal, themed events. The In the City nights have quickly become a staple on the calendar of young Cairenes and Tuesday’s roster featured DJs MadLou and Amr Hosny.

Tuesday night, perched high above the city, nestled in the Cairo skyline on the rooftop of the Fairmont Nile Towers, a glitzy party was in full swing. The stress and everyday annoyances of life in this city were put on hold as party goers mingled, laughed and danced. This was Summer in the City.

Standing against the backdrop of the twinkling city lights, enjoying a cool breeze, and listening to fresh remixes of the latest contemporary hits was not the worst way to spend a Tuesday night. The rooftop was transformed into a comfortable venue, offering the space to sit back and chat with friends or shuffle over to the dance floor and boogie down. Waiters were attentive and the bar left nothing to be desired.

In typical Cairo fashion, the party did not get crowded until midnight, although the official starting time was 10 pm. By 1 am, every inch of the rooftop terrace was occupied. The younger crowd danced the night away and the more mature partiers occupied the VIP area on the couches.

The younger crowd filled the venue with vibrant energy and kept the dance floor packed all evening long. The music varied from popular dance hits to clever remixes of indie music.

While the variety of music was greatly appreciated by all, the DJs cleverly ensured they both kept the overall theme consistent, giving the dancers no reason to stop moving. “Each season has its own flavour, colours, and theme. I tend to mix it up when it comes to music, I play current hits but I’m also responsive to the crowd’s needs,” says Amr Hosny, Event Republic’s resident DJ.

Newcomer DJ MadLou was given the opportunity to show off his spinning talents and the crowd responded enthusiastically. One partygoer explained: “The reason why I enjoy these parties so much is because it is all about the music and not about the pretentiousness of the party scene in Cairo.”

Event Republic, the brainchild of Sebastien Moros and Waseem El Tanahi, is responsible for organising some of Cairo’s most sought after parties. Besides carefully choosing the appropriate venue to match the mood of the party, the team is daring with their choice of music. “We like to use the In the City parties as a platform to showcase local talent.It is really hard to break into the party scene, so we decided to use a different local DJ for each party to give them a chance.Sometimes it works, and sometimes it does not,” Moros told The Daily News Egypt.

In addition to the In the City series, Event Republic throws an average of five stand alone parties a year, usually with a unique theme. The popular School Disco has been a recurring party for the past four years, with all proceeds going to school charities. The company also throws corporate events for sponsors, either as an internal event or a more public event with a strict guest list.

With Ramadan around the corner, the party scene will be paused but Event Republic promises there will be two exciting, still top secret events to be look forward to after the fasting is over.