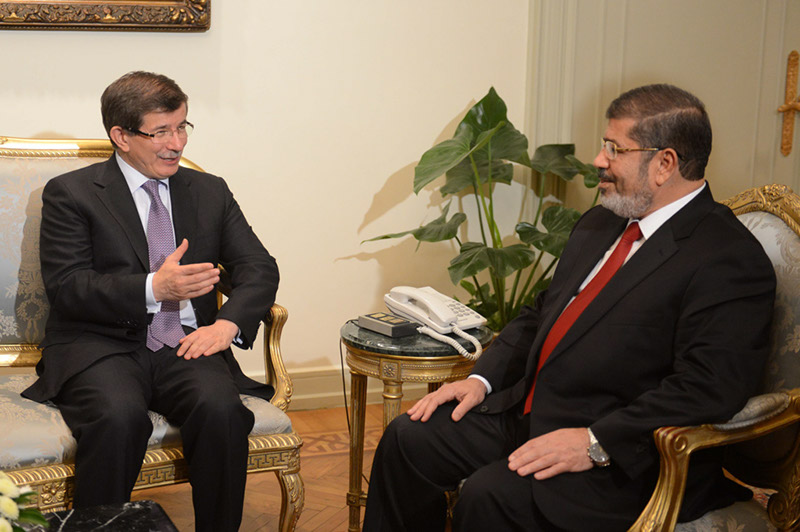 Turkish Foreign Minister Ahmet Davutoglu visited Egyptian President Mohamed Morsy, making him the foreign dignitary as well as the first representative of a non-Arab state to visit the newly-elected president.

It was also attended by Turkish Ambassador to Egypt, Hussein Awny.

Davutoglu said during the meeting that Turkey” is willing to work hand-in-hand with Egypt in all fields for the sake of making peace and stability prevail in the region,” according to Alarabiya.

Davutoglu came to attend the two-day conference held for the Syrian opposition by the Arab League, in Cairo.

Following his meeting with Morsy, the Turkish Foreign Minister held a news conference and urged the Syrian opposition to unite.

During the past year, the foreign minister has visited Egypt five times and met with former presidential candidate Ahmed Shafiq, whom the Mediterranean nation seemed to favour due to the striking similarities his potential presidency bore to the Turkish system.

The relationship between the Muslim Brotherhood (MB) and Turkey started only after the 2011 uprising when Turkey’s Prime Minister Recep Tayyip Erdogan visited Cairo last September.

Even though the Brotherhood members looked forward to his visit, Erdogan quickly came under fire by the Brotherhood when he called for a secular state in Egypt, provoking the ire of more conservative members of the party.