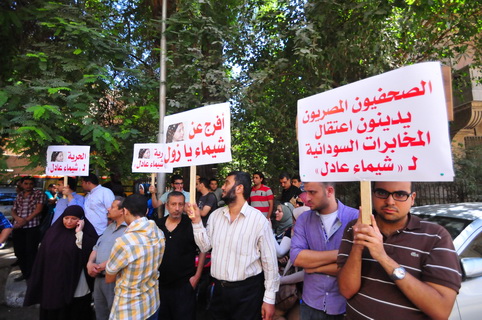 A protest was held in solidarity with Egyptian journalist Shaimaa Adel who was arrested in the Sudanese capital, Khartoum on Tuesday, last week.

The protest took place in front of the Sudanese Embassy in Garden City on Saturday at noon. There were only dozens of people in the small gathering.

They included Adel’s parents and several people from Al-Watan, the newspaper Adel works for.

Al-Watan reported that Adel’s mother led the chants in the protest calling for her daughter’s release.

Shaimaa’s mother and sister told Al-Watan newspaper that they still can’t believe that Adel was arrested in Sudan.

“She went to Libya and Syria and I was worried about her, but when she went to Sudan I was not worried,” her sister added.

Adel’s whereabouts are not very clear at the moment. Following her arrest, there were several reports of diplomatic efforts being made to release her.

An article by state-run Ahram-Online on Wednesday, citing spokesman of the Sudanese Embassy in Egypt, stated that Adel had been released.

Daily News Egypt could not independently verify that Shaimaa has been released.

Adel’s family and activists supporting her do not seem convinced.

Salma Al-Wardany, another Egyptian journalist arrested in Sudan last month, said on Twitter that Adel was released then arrested again after she posted something on Facebook.

Adel was arrested along with a Sudanese journalist, Marwa Al-Teejany.

She covered the protests that erupted in the Arab World, first for Al-Masry Al-Youm then for Al-Watan newspaper.

She was arrested for covering the wave of protests which started in Sudan last month.

The protests which had started on June 16 in Khartoum University were sparked by the austerity measures announced by the overnment.

They then spread over the next few days to other parts of the country and the demands grew to reach calls for the ouster of General Omar Hassan Al-Bashir who has been ruling the country since 1989.

The protests were met with a violent security crackdown which targeted Sudanese and foreign journalists.

After her release, she was deported from Sudan.

In a press release by Amnesty International last month, the human rights organisation said  Sudanese authorities must end the ruthless crackdown on protests and harassment of journalists covering demonstrations.

Calls for protests in front of the Sudanese Embassy were renewed Saturday.