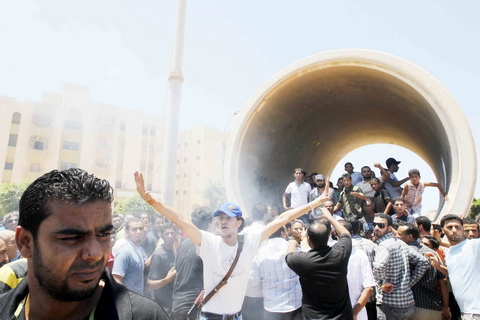 Voting started Saturday amidst tension, uncertainty and violence in Libya’s first-ever democratic elections following the ouster and killing of Muammar Gaddafi and the end of his 42-year rule.

Armed men angry at the distribution of seats shot down a Libyan Air Force helicopter carrying ballots and other election equipment on Friday, leaving one election official dead.

Libyans are voting for a 200-member General National Congress (GNC) that will replace the ruling unelected National Transitional Council (NTC), which will be tasked with naming a prime minister and forming a cabinet.

The run-up to the poll has been marred by violence and threats of boycott as many in the oil-rich east feel the distribution of seats (100 to the west, 60 to the east and 40 to the south) is unfair.

During the Gaddafi-era, the east was marginalised and with easterners feeling that their oil was being used for the benefit of Tripoli and the western regions. They frequently called for a larger share of oil money.

Following the NTC’s passing of the election law and the announcement of the seat distribution, many tribal leaders and former rebel groups in the east called for semi-autonomy and a federal system.

Some have even declared self-rule, setting up a ruling council of their own, forming a military and vowing to boycott the elections.

On Thursday, eastern former rebel fighters armed with anti-aircraft guns took over and shut down three oil refineries in the towns of Brega, Ras Lanouf and Sidr in a bid to pressure the NTC into cancelling the elections.

It is unclear, however, how effective the boycott movement will be. Some 2.9 million Libyans – over 80 percent of the eligible population – have registered to vote.

The GNC was also meant to draft the country’s new constitution but the NTC has recently announced that the 60 member constitution drafting committee would now be directly and independently elected.

After widespread opposition to the division of seats inside the GNC, the NTC initially decreed that the GNC would vote in a 60 member drafting committee with 20 seats equally allocated to each region.

However this proposition failed to please those calling for self-rule in the east, so the committee will now be elected directly and will be independent of the GNC.

Over 3,000 candidates are running for the 200 seats, 120 of which are reserved for independents with the rest allocated to political parties and groups.

Out of over 100 parties contesting the vote, the Muslim Brotherhood’s Justice and Construction Party, alongside the more conservative Islamist Al-Watan party led by former jihadist Abdel-Hakim Belhaj, a long-time member of the anti-Gaddafi National Front Party, and the secular Alliance of National Forces led by former Prime Minister Mahmoud Jibril are all expected to do well in the poll.

The NTC has declared that the new constitution must stipulate that Sharia law is the main source of legislation.

This has been widely accepted, including by the secular parties, although there will likely be debate between secular and Islamist groups as to the extent that Sharia should be applied.