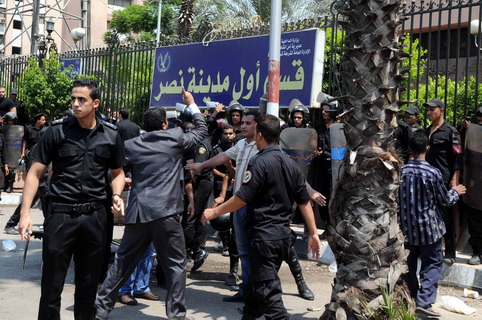 Lawyers continued their third day of a sit-in in front of the Nasr City police station, after a lawyer on Thursday became involved in a large brawl with policemen who refused to allow the man access to a client held at the station.

The brawl drew the attention of lawyers’ syndicates across the country that joined in the civil disobedience as a show of solidarity.

The tension between the lawyers and police disrupted the resumption of the Port Said massacre trial, which was scheduled to continue on Saturday but was delayed due to a number of lawyers’ syndicates weighing whether to deploy lawyers to police stations across the country to stage similar protests.

Events escalated late night Thursday, after lawyer Mohamed Abdel Aziz was denied visiting a defendant inside the Nasr City police station. The lawyer was told the defendant was not inside the station.

Abdel Aziz argued with the police and a verbal dispute quickly became a physical fist-fight between lawyers and policemen outside of the station.

Around eight lawyers were injured along with several police officers during the fight.

Nasser Amin, the head of the Arab Centre for the Independence of the Judiciary and Legal Profession, told the Daily News Egypt the clashes were a natural consequence of an already deteriorating relationship between lawyers and policemen.

“The attacks, transgressions and blockages of policemen against lawyers inside police departments have created a dire relationship between both parties.” Amin said.

Ashour called for lawyers abstaining from representing “any police officers in front of all criminal courts.”

Ashour said any lawyer who violated the syndicate’s demands would be subject to a disciplinary investigation.

Ashour also demanded for the suspension of all of the police officers involved in the fight. Ashour said a delegation of lawyers would be formed to meet with President Mohamed Morsy in order to present the demands to the president.

He also called for the sit-in to continue until the demands were met. Ashour also gave authorities a 24-hour deadline to respond to the demands, or face nationwide protests at all of the country’s police stations.

Ashour also said the demonstrations were about restoring dignity to the “legal profession” in order to break “the arm of violence.”

The Ministry of Interior issued an official statement Saturday on its website, apologising for the events.

The ministry stressed better relations must be forged between lawyers and police.

The statement also clarified that even though the public prosecution is officially holding investigations about the incident, the Minister of Interior, Mohamed Ibrahim, has assigned the inspection and censorship sector in the ministry to conduct immediate investigations with the officials in the police department within the next 48 hours.

Ashour called on lawyers to remain calm until the results of the investigation were released.

The public prosecutor ordered an immediate investigation into the incident on Friday, according to MENA news agency.